Medical experts are called physicians because the word physic originally referred to both the practice of medicine and to natural science. As scientific fields matured, physic as it applied to healing was phased out in favor of medicine. Physicist was coined to refer to someone who studies "physics," and physician was left with its association with medical doctors.

We in the dictionary trade tend to concentrate more on new words coming into the language than words that are quietly leaving it. This is understandable and even predictable, but sometimes the relics of disused words hiding in plain sight tell us a story about how the language has evolved.

Case in point: a scientist studies science; a dentist applies dentistry; a plumber works with plumbing. But why is it that a person who practices medicine is called a physician? 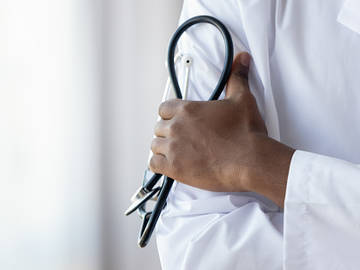 The answer can be found through the lexicographical method.

It turns out that physic was used, starting in the 1400s, to mean “the practice of healing disease” and “a remedy for disease”—both now usually expressed by the word medicine. In pre-modern times the study of medicine and natural science were closely connected, and the term physic applied to both.

In Shakespeare’s day, physic was used to mean “medicine” and physician was used as we still do today, meaning “one who practices medicine”:

This Physicke but prolongs thy sickly days (Hamlet)

More needs she the divine than the physician. (Macbeth)

Shakespeare’s contemporary Thomas Nashe used physic as the personification of medicine in his poem called “A Litany in Time of Plague”:

Rich men, trust not in wealth,

Physic himself must fade.

All things to end are made,

The plague full swift goes by;

Medicine was a synonym for this “remedy for disease” use of physic, and the two words co-existed for centuries:

Thus did they all things that were contrary to their safety, as if no physic or medicine had been bestowed upon the world by the true physician of all
—William Camden, Britain, or A chorographicall description of the most flourishing kingdomes, 1637

In the 1725 dictionary of Nathan Bailey, the largest dictionary of its time, the definition of medicine is written in terms of physic:

MEDICINE : the Art of Physick; also a Physical Remedy.

And yet, in the same dictionary, Bailey also clearly expresses awareness of a changing vocabulary as the scientific standards evolved:

PHYSICK : is in General the Science of all material Beings, or whatsoever concerns the System of this visible Wor[l]d, tho’ in a more limited and improper Sense it is apply’d to the Science of Medicine ; the Art of curing Diseases, or Medicines prepared for that purpose

With his judgy “improper” note, Bailey was acknowledging a scientific, cultural, and linguistic change; it was only after more specialized fields separated from each other that the words that name those fields became established. In the 18th century, chemistry separated from alchemy, astronomy separated from astrology, biology was coined, and physics became restricted to the study of matter and energy rather than living things.

A century later, in 1828, Noah Webster also gives physic both a definition and a note about its fading usage:

This left the medical use of physic stranded, lexically speaking: physics was the name for a new branch of science, and medicine conveniently and completely displaced the use of physic that was no longer used.

Physician, however, didn’t get the memo. It had long been used for both “one who studies natural science” and “one who practices medicine,” but once the field of physics had been isolated from the others and, ultimately, physicist was coined in the 1800s as the term for a specialist in the new science, physician was left with the remnants of a root word that had changed in meaning. In French, the word médecin is used for a person who practiced médecine —but English isn’t so rigorously logical.

Of course, we could just call a physician a doctor, but even this is a term that has changed over time. Doctor comes from the Latin word for “teacher,” and gave us related words like doctrine and document. In the King James Bible, its meaning is something like “a religious scholar”:

And it came to pass, that after three days they found him in the temple, sitting in the midst of the doctors, both hearing them, and asking them questions.

Later, the term became used for those attaining the highest degree of learning in a particular field, with medicine being among the disciplines. It may simply be because the public has much more reason to seek out a medical doctor than, say, a doctor of literature or applied math, that doctor as a general term became synonymous with practicing physicians rather than with practicing physicists.

Finally, another near-synonym is surgeon. Surgery was often looked down upon by physicians and was in fact performed by barbers from the middle ages until well into the 1700s (the Oxford English Dictionary even has an entry for barber-surgeon)—it’s the reason a barber’s pole is red and white to this day. They were trained by apprenticeship and their manual skills were considered less intellectually challenging than the educations that made physicians “doctors.”

Ultimately, of course, surgeons became the highly trained and highly skilled people we know them to be, and whether we call them doctors or physicians, are among the medical professionals who are trusted because of their demonstrable expertise.