How 'Way' Became a Word for 'Road'

Life is a highway

When spring gives way to summer, people tend to go other ways than their usual ones. They leave their own driveways to take to highways and byways, using parkways and expressways and thruways and tollways and beltways. Those who fly travel airways after taking off from runways. Railways and subways move some to their destinations. Some traverse bikeways, or move down gangways. The beachbound may use a causeway to reach a seaside cottage, which may or may not have a breezeway. Some might take a right-of-way to get to some out-of-the-way place, while others hope for success on the fairway or at the raceway. A few may even lose their way, though we hope for not too long.

What an adaptable little number that word way is. 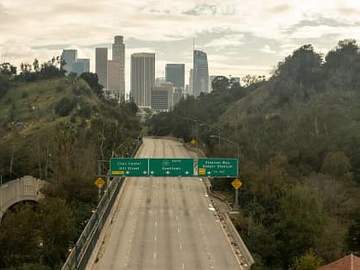 If you're thinking of the classic George Carlin joke, we've written about that here.

The History of 'Way'

The Merriam-Webster.com dictionary entry for the noun way has 12 senses, 8 subsenses, and 2 sub-subsenses as well as 8 idioms, most of which have multiple senses. But the one that's useful when summer travel plans are the topic is the first and oldest: "a thoroughfare for travel or transportation from place to place." That sense of the word is the one that's been with English speakers since the language's name was modified by "Old." (Old English is the English spoken before 1100 or so; Middle English is the English spoken between 1100 and 1500, give or take half a century on either end.) Way comes from the Old English weg, which shares an ancestor with the Old High German weg, which in turn comes from Old English wegan (“to move”), from Latin vehere, “to carry,” and via, “way.”

Shakespeare's Use of 'Way'

Shakespeare in Richard II (1597) referred to "These high wild hills and rough uneven ways." He could have used roads instead of ways if he'd wanted to but not if he'd been writing much earlier than the 1590s—road wasn't synonymous with way until the 1580s, as far as we can tell. For Shakespeare, the word road could just as likely refer to an area of water (one less enclosed or sheltered than a harbor) as it could to a thoroughfare for travel: "an argosy / That now is lying in Marseilles road," says Gremio in The Taming of the Shrew. That meaning of road dates to the 1300s. Even less familiar are meanings from Old English; road back then could mean the act of riding on horseback, or a journey or incursion on horseback.

Meanwhile way and highway were by Shakespeare's time well established as terms for the trodden path. Highway, like way, dates back to Old English, and referred at first specifically to the highways made by the Romans, who'd built them (or had them built) atop mounds of dirt thrown up from ditches to create an elevated area—a high way. A bit newer is its companion byway, referring to a side road, a road less traveled; that term dates to the 14th century.

The rest of our traveling way words are much newer. The term parkway dates to the late 19th century, when the modern concept of a parkway was born out of the work of Frederick Law Olmsted and Calvert Vaux in New York's Central and Prospect Parks. Parkways were to be bordered by park-like land (lots of trees and shrubs) with limited access and no trucks allowed. The Bronx River Parkway was completed in 1925, and more parkways soon followed, including the Merritt Parkway in Connecticut.

The word superhighway was first used in the 1920s, though it's best known for latching onto information and inserting itself into most anything written in the 1990s. (Superhighway was preceded by the British motorway, which dates to right around 1900.) Superhighway was more concept than reality when the word was first used. The closest thing to our modern conception was the autostrada, begun in Italy in 1924. Next came Germany's Autobahnen ("automobile roads"), with construction beginning in the years leading up to World War II. The words thruway and freeway showed up around 1930 and both appear in the names of real roads: the east coast soon had its New York State Thruway, New England Thruway, and Harbor Tunnel Thruway, and California maps were increasingly lined with freeways, such as the Golden State Freeway. Expressway came into use near the end of the war and is common both generically and in the names of expressways themselves. Tollway (synonymous with turnpike) entered the language in the late 1940s; the term isn't known everywhere, but you'll know it if you drive the fastest route from Chicago to Des Moines. (Better have exact change.) Roads with tollway in their names exist, as far as our research reports, only in Illinois and Texas, though the word is used generically in many places as a synonym of toll road or the more formal toll highway. Turnpike (the 17th century vintage word comes from the revolving spike-laden barrier used to encourage the payment of a toll) is, on the other hand, more often used in actual names than generically. (Turnpike originally referred to the place where a driver paid a toll, not the road marked by such disturbances.) So when a tollway is planned the finished road will likely be called a turnpike, toll road, or toll highway. Finally, beltway gets us into the 1950s; after that it seems the big roads had all the way-names they needed.

MORE TO EXPLORE: There's My Ride: 9 Types of Vehicles