Who's is a contraction of "who is," as in "Who's there?" or "who has" ("Who's got the time?"). Whose is a possessive adjective meaning "of or relating to whom or which," as in "Whose shoes are these?" or "The dog, whose tail was wagging." Much like it's and its, people confuse these words assuming the apostrophe and s imply possession. In truth, most possessive words like his, hers, and my do not have apostrophes and neither does whose. 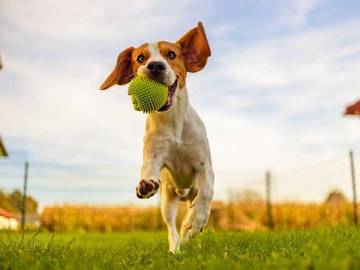 We all know who is a good dog.

Much like it’s and its, who’s and whose are two words that are confused very frequently. Let’s start by breaking it down simply:

Who’s is a contraction of who is or who has. It can be found at the beginning of a question:

as well as with who functioning as a relative pronoun

a teacher who’s [=who is] admired by everyone

a teacher who’s [=who has] inspired thousands of students.

How to Use 'Whose'

Whose is a possessive adjective meaning “of or relating to whom or which.” Grammatically speaking, we use the term possessive to refer to relationships beyond simple ownership. As with other words of possession, it can also be used to express association, agency, or the receiving of an action:

Whose sunglasses are these?

Jake, whose sister is an archeologist, is considering studying the subject as well.

The firefighter, whose brave actions saved dozens, was presented with a medal.

They live in a port city whose economy relies heavily on fishing.

a novel whose publication paved the way for a burgeoning genre

I ran into Mark, whose house I painted last year.

a building whose demolition had been in the works for years

The most well-known demonstration of possessive whose might be in the title of the comedy show Whose Line Is It Anyway?

Whose can also function as a pronoun meaning “that which belongs to whom”:

I found a hat, but I didn’t know whose it was.

We all submitted great ideas, but whose was the best?

Tricks for Keeping Them Separate

The confusion between whose and who’s is very similar to the confusion that occurs between it’s and its, where it's serves as a contraction of it is and its as the possessive form of it. That is mainly due to the fact that we are inclined to interpret automatically any word ending in apostrophe-s as possessive. Instead of saying, “I really like the paintings of Bob,” you’re more likely to say, “I really like Bob’s paintings.”

One thing to remember is that possessive adjectives usually don’t contain an apostrophe: my, your, his, her, its, our, their. Remembering that whose falls into the same category might help to steer you away from the apostrophe.