When Did 'Horse Race' Become Political?

People keep describing the current election as a horse race. But what do they mean by that?

This election promises, as do so many others, to provide an excellent opportunity for political observers and journalists of all stripes to dig out their favorite catchwords and hackneyed expressions to describe the contest. One particular term that appears to be in widespread use is horse race. 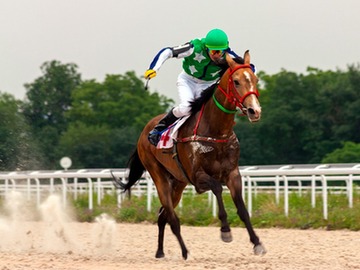 'Horse race' was first used to describe political contests in the early 19th century. It later took on its current meaning of "a close contest," and seems to be morphing again.

MR. EARNEST: Yes. And the President has not weighed in on the horse race on the Republican side, but the President has been pretty resolute in his belief that Mr. Trump will not be the next President.
—Press Briefing by White House Press Secretary Josh Earnest, 4 March 2016

At this point in the campaign, it's not like the voters get a substantive discussion on this national issues. It's a horse race; Cruz or Trump, Hillary or Bernie.
—St. Cloud Times [St. Cloud, MN], 17 April 2016

Ahead of tomorrow's Nevada caucuses, Rubio and Cruz are trying to win the expectations game: "There is less of a horse race underway and more of an argument about whose finish behind Donald Trump will be more impressive," David Weigel reports from Pahrump, where Cruz addressed hundreds of supporters from the bed of a pick-up truck.
—Washington Post, 22 February 2016

What is a horse race, and when did we begin applying it to nail-biters and other non-equine events?

The earliest record we currently have of the phrase horse race (describing an actual event in which horses run) is from 1579. Given that there have been horse races since antiquity this is a clear case of the word to describe something coming into our language after the thing in question had existed for some while.

For in them were mencioned that he had poysoned (besides many other) Ariarathes his owne soone, and Alcæus the SARDIANIAN, bicause he had wonne the bell, at the horse race before him.
—Plutarch, The Lives of the Noble Grecians and Romanes (trans. Thomas North), 1579

Horse race appears to have taken on a figurative meaning by the early 19th century, when it began to be used to describe political contests. However, in the first few decades of such use it was not employed in the sense in which it is commonly found today (indicating a close contest), but instead had a more generalized meaning of "contest."

Political Horse Race.—The Editor of the Peoples’ Press, in comparing the Presidential contest to a Horse Race, says, when speaking of Mr. Adams, that “He had been pampered and surfeited upon soft corn and pumpkins.
—United States Telegraph [Washington, DC] 1 January 1829

By the end of the 19th century horse race had taken on the connotation of an uncertain, or close, contest.

And yet so uncertain are the issues of a political horse-race that any one of them may possibly pull up and come in winner.
—Cincinnati Enquirer, 25 December 1877

The term is by no means confined to political contests; horse race may be found throughout the 20th and 21st centuries used in reference to any one of a number of close forms of competition. One thing of note, however, is that when it is used in a political sense horse race appears to be once again shifting its meaning. For some writers, horse race can be used quite loosely, in relation to anything having to do with some aspect of a political contest.

With all the mudslinging, name calling, attack ads and horse-race theatrics, the real issues at stake in this election easily get lost.
—The New York Times, 13 April 2016

That was the presidential horse race part of Ryan’s remarks.
—Washington Post, 13 April 2016

Some people might find it disconcerting to have a word in such a state of flux. If you find yourself in search of a more stable expression to describe the current election, we recommend barnburner.