Is 'Could Of' an Accepted Form of 'Could Have'?

The verb sense of 'of' is in the dictionary, but not endorsed.

Pop quiz! What part of speech is the word of? (Slight pause while we wait for the reader to click on the link provided in the earlier sentence, or to sit there, smugly basking in the certainty of knowing the answer.) 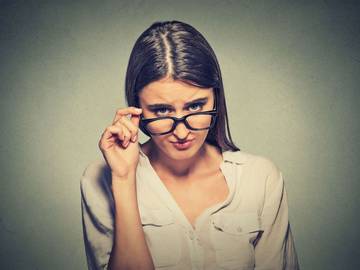 Pictured: a typical response to the phrase "'Could of' is backed by the dictionary."

The answer (which is not a trick answer) is that of is usually a preposition, but also may function as a verb, typically when used as a substitution for have, as in ‘I could of written it correct, but wanted to see what you’d say if I didn’t.’ (Slightly longer pause while we wait for the reader to erupt with anger over this use, and over the fact that we enter this sense of of in our dictionary, and then again after reader cross-references several other dictionaries and finds that most of them also provide an entry for of as an auxiliary verb).

The reason for why of came to be used for have is that the latter word (and even more so its contracted form, seen in could’ve, should’ve, would’ve) is unstressed when spoken. There is very little phonetic difference between “I could’ve paid attention in English class” and “I could of paid attention in English class.” The spoken version of this is far more common than the written one, but there is considerable evidence of both.

This use, it should be noted, is widely shunned by usage guides, schoolteachers, people who send you annoying articles on social media about the declining state of education today, and well-nigh everyone else. So why do we define it? Because of that considerable evidence mentioned in the last paragraph.

A scouting report written by Captain Isaac Beall during the Revolutionary War contains a couple of our earlier instances of the word used in this fashion, illustrating that of, while not terribly common in writing at that time, has been with us for well over two hundred years now.

I was inform’d by a Capt’n of Molitia that about Two Hundred would be Imbodyed by Mondy Nite a plenty of Good Pilets are amongs them—if I could of been join’d by a party of the Molitia which I apply’d for I would of attacted the body that lay in the English Nabourhood, I had not a guid nor could Get non tell the Next day.
—Isaac Beall, Letter to Adam Stephen, 20 Apr. 1777

The verb form of of begins to show up in print more often in the 19th century, generally when an author is attempting to replicate the speech of an uneducated person.

There lay the poor boy, dead enough: and all the doctors in Philadelphia couldn’t of been of no manner of service, so there warn’t any use in snivering and chafing.
—Jabez Rankin, Spirit of the Times, 26 Dec. 1840

Now, old fellow, you might of heard that we like to have got into a war with the British about some boundary or other.
—Portsmouth Journal of Literature and Politics, 5 Aug. 1843

The old man’s heart promptly quailed. He stood dumfounded and forgot Mandy and the other man’s wife in the face of his new foe. “If I’d of known it was you,” he said, “I wouldn’t of done it.”
—The San Diego Union and Daily Bee, 3 Apr. 1893

The use appears to have been common enough that it was lampooned in an article in the late 19th century, along with questionable uses of the past tense of to do.

Possible past tense of verb done. Singular—I might, could, would or should of jest plumb done gone and done it.
—The State (Columbia, SC), 16 Jul. 1893

There are many examples of prominent authors in the 20th century using forms such as could of, typically when rendered as dialogue.

I could of ended marrying the boy, and moving, and being killed, I think, as a punishment … I understand it.
—David Mamet, A Scene-Australia (from No One Will Be Immune), 1994

Sure, I could of let you die, but I didn’t. Naw, I kept you with me—off and on.
—Langston Hughes, Soul Gone Home (in The Collected Works of Langston Hughes: Vol. 5), 2002

I don’t know how you could of thought that when everybody knowed she’s been married—and she had a son.
—James Baldwin, The Amen Corner, 1954

A lot of people cry. They could of heard it … anywhere.
—Beth Henley, The Debutante Ball, 1991

The amount of written evidence produced over more than two centuries means that we are inclined to define a word, but it does not mean that we recommend that it be employed (unless, of course, it is for a desired effect). Our usage guide, the Merriam-Webster Dictionary of English Usage, addresses this matter in some detail and provides a stark assessment: “you had better avoid it in your own writing.”