The words peel and peal are among the many unhelpfully homophonous pairs of English words. In conversation, it matters not which one has the ea and which one has the two e's, but in writing, a context calling for one but showing the other can produce a sentence that looks, well, wrong. No worries: we're going to help you get them all right. 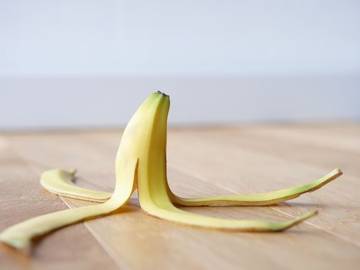 Of course, a fall caused by a banana 'peel' might provoke 'peals' of laughter.

Peel is commonly used as a noun and as a verb, with both coming ultimately from the Latin word pilare, meaning "to remove the hair from." Peel as a noun is easily applied in the produce section of the grocery store, where we encounter items with peels all about: a peel is the skin or rind of a fruit, such as those found on bananas, apples, and oranges. The related verb has broader use, some of it close to the noun use: to peel a fruit or vegetable is to remove its peel or skin. But peeling can also be about stripping off other outer layers, such as labels from cans or paint from walls. The verb has over the years developed extended figurative uses, as when someone or something that breaks off from a group or formation is said to have "peeled off," or when a vehicle speeding away is described as having "peeled out."

The verb peel is also the word in the phrase about being watchful: keep your eyes peeled. The implication is that eyes are open, with vision unhindered by eyelids or anything else.

Peal, on the other hand, is typically seen in action as a noun referring to (historically, mostly) the loud ringing of bells, as in "the peal of wedding bells," or to a loud sound or succession of sounds, as in "peals of laughter" and "peals of thunder." A verb peal exists as well, with the meanings "to give out peals" and "to utter or give forth loudly," but the noun is far more common. Both have their origin in the Middle English word appeal, meaning "summons to church."

Confusion between these two terms mostly occurs in their extended uses. To keep your sentences looking right, remember this: sounds are "peals," be they of laughter or thunder, and eyes are kept "peeled" if the bearer of the eyes doesn't want to miss something.