This Isn't ‘Sponcon’ (But It Is About the Word)

Trust us, it’s the best money can buy

You’re probably familiar with sponcon, even if you haven't heard the word before: It’s what in the entertainment world is called product placement, refitted for the social-media era.

Since the scandal, Olivia Jade has lost lucrative spon-con deals from brands like Sephora and Estée Lauder, and has faced a ton of angry comments from Instagram teens, so it’s probably safe to say that she’s less than pleased about this particular turn of events.
— Kimberly Truong, The Cut, 21 Mar. 2019

Though it may seem like a useful tactic when you're starting out, more established influencers worry that fake sponcon is creating a race to the bottom. Because brands can piggyback off of waves of unpaid influencer promoters, some have ceased paying influencers completely, or now pay rates far below what they previously spent.
— Taylor Lorenz, The Atlantic, 18 Dec. 2018 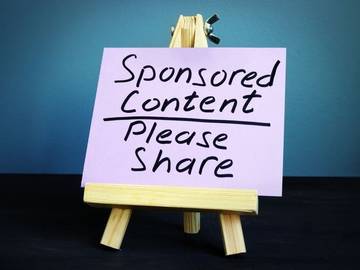 Your company name could be here.

Sponcon combines the rhyming initial syllables of "sponsored content." The emergence of the internet helped to shift the meaning of content from “the topics or matter treated in a written work” (as in a table of contents) to “the principal substance (such as written matter, illustrations, or music) offered by a website.”

Sponcon is entwined with influencer marketing, to use the term for one whose habits on social media are likely to be copied by that person’s followers. It is a form of what is termed native advertising, referring to advertising made to resemble the medium in which it appears.

When your favorite singer posts a photo on Instagram showing her sipping from a bottle of a certain brand of juice with the label turned just so? That’s (probably) sponcon. Same with the photo showing the same singer vacationing on a tropical island with language encouraging her followers to do the same.

Sometimes sponcon is indicated as such, even with the hashtag #sponcon. In fact, much early contextual use of the term treated it as a hashtag, sometimes with the initial letters of the original words capitalized:

After a short #SponCon segment of the contestants showing off their Sally Hansen Airbrush Legs, Chris Harrison introduces the bathing suit competition to really kick off the show.
— Amy Zimmerman, The Daily Beast, 12 Sept. 2016

The use of celebrities to endorse products is nothing new. But now, instead of the celebrity making an appearance in an advertisement, with sponcon the product makes a subtle (or, sometimes, not-so-subtle) appearance in the endorser’s day-to-day narrative.

While most sponcon-adjacent celebrities tend to make their living in show business and sports and fashion, some arise from industries you wouldn’t immediately think as having the power to influence consumer taste, such as medicine.

Using influencers to sell products to the sick can be a particularly insidious form of marketing in large part because of the vague parameters set by the FTC and FDA. With today’s ambiguous regulations, health care sponcon will continue to saturate our feeds with posts that appear sincere but end up being misleading. Consumers looking for remedies to what ails them should not be expected to differentiate nuances in regulatory wording between “clinically validated” and “FDA-approved.”
— Suzanna Zuppello, Vox, 15 Feb. 2019

Now that's just what the (non-)doctor, uh, urged you to order?