This simple word is surprisingly controversial

Earlier in 2016, the venerable news agency Associated Press added a number of entries to their stylebook; among these was the dictum that the word accident should be avoided when referring to car crashes in which negligence was “claimed or proven.” 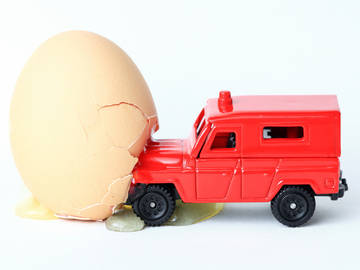 Accidents happen. And while the AP may object to the use of 'accident' in cases involving negligence, we at the dictionary will not.

Associated Press explained their decision by saying accident “can be read by some as a term exonerating the person responsible.”

For vehicle crashes: When negligence is claimed or proven, avoid the word accident. In such cases, use crash, collision or other terms.

While this proclamation did not garner the same level of attention as did the AP’s 2012 tweet about the use of a certain adverb (“We now support the modern usage of hopefully”), it still is worth examining.

This advice regarding the word is quite specific, inasmuch as it is only concerned with car crashes, and thus may not have much effect on how you choose to use (or avoid) accident. It is also but one in a long line of warnings about how to use words that fall into the general category of “things we’d rather not have happen to us.”

If one were to look at the full spectrum of pitfalls which await the casual speaker of English who wishes to describe a simple car crash, it could well appear that violating some admonition of usage is inevitable. As a way of demonstrating this, let us imagine an entirely fictional scenario in which you have witnessed a terrible traffic accident, and are being interviewed by a police officer who is determined to righteously uphold the semantic purity of English.

P.O.: “Please describe, as clearly as you can, what you saw.”

You: “I was walking home when I witnessed the incident….”

P.O.: “Stop right there! Did you say incident? Are you not aware that The New York Times Manual of Style and Usage specifies that 'An incident is a minor happening or disturbance. When used in reference to accidents or events that have serious consequences, the word seems to trivialize them'? People were seriously hurt; please find a more appropriate word."

P.O.: “Mishap? Did you seriously call this a mishap? Even though Mark Davidson wrote in his 2005 book Right, Wrong, and Risky that 'The word mishap … is appropriate only for accidents that are minor'?"

You: “I was walking home when I saw this one car collide with the other car, which was parked by the bus stop….”

P.O.: “Back it up there, Sparky. These cars didn’t collide: 'For a collision … at least two objects must be in motion. Thus, a moving vehicle doesn’t collide with a parked vehicle or some other stationary object.' That’s from John Bremner’s Words on Words, 1980."

You: “Well, then they didn’t collide, but the one car came zooming down the street…."

You: “Listen, I’m a bit shook up by all this. I just saw what looked like a painful accident, and I’m having a spot of trouble coming up with the right words….”

P.O.: “Why did you call it an accident? Do you know for a fact that neither party was at fault? Our witness reports are rendered in AP style, or not at all. And besides, Frank Vizetelly’s A Desk-Book of Errors in English tells us that 'accidents should never be spoken of as painful.' See, it’s injuries that are painful, and injuries occur as a result of accidents. I’ll ask you one more time to describe what you saw, and please try to use language that is sufficiently exact.”

Happily, you will not often be called upon to use accident in as deliberate a fashion as is prescribed by the Associated Press. And if you do, you may be interested in knowing that our legal dictionary specifies that accidents sometimes occur “through carelessness, unawareness, ignorance, or a combination of causes.”