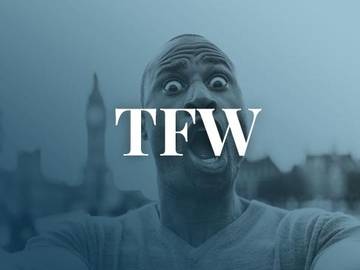 What does TFW mean?

TFW or tfw is an abbreviation on social media and the internet that usually means "that feel when," "that feeling when," or "that face when."

Where did TFW come from?

It has been speculated that the abbreviation TFW developed from the earlier meme "I Know That Feel Bro," which originally depicted simply drawn characters hugging each other in empathy.

How is TFW used?

TFW usually begins the emotional outreach and is sometimes followed by a redundant when. (We can forgive this grammar incorrectness—proper grammar is a low priority when expressing one's "feels," especially on social media.) A description of some not-so-everyday situation—running the gamut from being humorous to unpleasant—is then typed that expresses how the writer feels. It is hoped that the readers can relate—and usually they do, especially when they see the amusing images or videos that typically accompany the message or post.

TFW you get to your door and don’t have your keys. #FearTWD pic.twitter.com/tWIaDsIiYD

TFW you randomly receive a referral credit from some startup. 🙌🏼

It’s the modern day equivalent to finding cash in the dryer.

TFW can also mean "that face when" in reference to the expression on a person's or animal's face after experiencing something that causes a physical or emotional reaction, which is shown in an accompanying image or video. Here are some examples:

tfw you hear IT: CHAPTER 2 will incorporate the Ritual of Chüd from the book pic.twitter.com/uYrkKmeuqs