The Inside Poop On 'Spoopy'

Notes on a new Halloween classic

Spoopy (inflected as spoopier and spoopiest) might startle people, especially around Halloween season. One reason is that it resembles spooky, and a person might see its formation as a jaw-dropping typo. Another is that it has poopy (you know, child-speak for poop) in it, which makes its spelling amusing to people who enjoy bodily humor. (Everyone.) Millennials will tell you that spoopy is fun internet slang—and they'd probably be more than happy to share some memes with you to prove it. 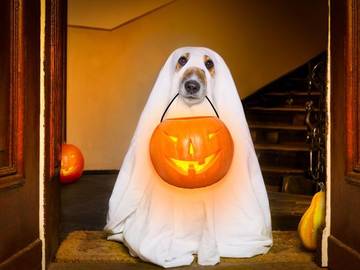 Anything but chocolate, please.

Essentially, the word is used to describe something that typically would be spooky, like an image of a skeleton or ghost, but is actually rather comical (often because of how it is graphically modified or manipulated, amusingly captioned, or just plain silly). The word has other connotations as well: it is sometimes used for things that are intended to be spooky but simply fail to scare, or it describes something that mingles cuteness with spookiness in a grotesque way.

The origin of this internet sensation is, unsurprisingly, spooky. It is a comical (we assume) misspelling of that adjective that was spotted on a department store's Halloween sign written in a "skeletal" font and photographed. The image was then uploaded to the internet; in short order, spoopy went viral.

Other spoopy misspellings of words have circulated the internet—such as creppy for creepy and doo for boo—but they don't have the same internet virality as spoopy, which has also spawned spooptacular and spoopiness.

The popularity of spoopy seems to be due to its amusing, childish sound: it's fun to say; it has the word poopy in it; and it toys with the science of linguistics as an illogical derivation from spooky. (Really, why the "p" substitute? Something spoopy will rarely be frightening enough to scare the, uh, doo out of you—right?)

The word is usually used on social media, but it is gaining currency in edited prose.

It's a message of authentic weirdness that's deep in the heart of beloved spoopy classic Beetlejuice, where Winona Ryder's Lydia Deetz, a self-proclaimed strange and unusual person, finds companionship with the ghostly couple living in her house. They join together to try and scare Lydia's oh-so cultured parents out of town, eventually summoning Beetlejuice, the fixer of the afterlife, played in the oddest way by Michael Keaton. That movie, too, is full of horrifying moments that would send you running out of the room if done by Wes Craven ..., but like before, it's not without its laughs and message of a found family.
— Petrana Radulovic, Polygon, 21 Sept. 2018

when u write a spoopy twet and then u think abot it too much and get scared pic.twitter.com/vEmAjzfRDx