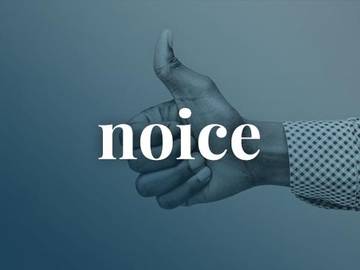 What does noice mean?

Noice is a dialectal variant of nice.

Where did noice come from?

One of the many ways in which dialects of English differ around the world is in the pronunciation of vowels. In standard American and British English, the long i vowel in words like shine, tide, or size is a diphthong—linguistics jargon for two vowel sounds joined in one syllable to form one speech sound—that is pronounced with the lips unrounded. However, in some varieties of Australian English and New York English and in some dialects—such as Cockney English—the long i vowel begins with the lips rounded, in a position more similar to the vowel in words like short or lawn. Thus, the long i diphthong in these dialects sounds much like the diphthong in words like coin or joy.

The slangy noice originated out of such dialectal pronunciation for nice.

How is noice used?

It's noice, it's different, it's unusual! Comedian Magda Szubanski brings legendary character Sharon Strzelecki back to life at Crown Melbourne ... amid rumours Kath & Kim could make a return to the small screen.
— Caleb Taylor and Andrew Court, The Daily Mail (Australia), 18 Aug. 2018

NOICE! 'Brooklyn Nine-Nine' Now Has an Order for 18 Episodes at NBC https://t.co/QyvdRulxmj pic.twitter.com/ETnfI6tyPk