The world of Winnie the Pooh is cozy, peaceful, and idyllic: a forest as the perfect playground for Christopher Robin and his circle of friends, stuffed animals rich in personality and curiosity.

Indeed, it’s the richness and variety of personalities that make the Pooh stories so vibrant and enduring, since the contrasts between the characters create the dramatic rub that adds color to their visits, conversations, and meanderings through the forest. There’s the permanently hungry and ingenuous Pooh himself, playful and nervous Piglet, energetic Tigger, and the sad-eyed, depressive Eeyore. Eeyore’s personality might be termed downright self-pitying at times—acknowledgment of a remarkably adult trait, unusual in children’s books. His home is called “Gloomy Place.” 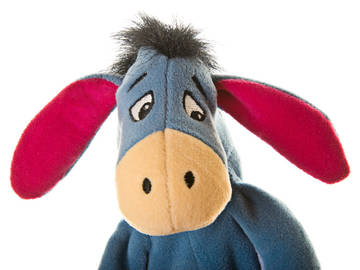 The rabbit is Rabbit. The owl is Owl. But Eeyore, the donkey, takes his name from a phonetic spelling of the sound a donkey makes.

While there are few glum characters in children’s books, anthropomorphized animals are of course a staple of the genre. The complex personalities of Milne’s animal characters are offset by the refreshing simplicity of their names: other than Pooh (named for a real bear whose owner came from Winnipeg to London), they are called by the common names of their species, or very slight variants of them: there’s Piglet of course, and Kanga and Roo, and Tigger is perhaps an early reader’s rendering of tiger. The rabbit is Rabbit, and even the owl is called Owl. (Gopher was added later by Disney.) It stands to reason, then, that in this company Eeyore’s name shouldn’t be quite as exotic as it might appear.

And it isn’t: Eeyore is simply a phonetic spelling of the sound a donkey makes, the braying noise usually transcribed in American English as hee-haw. In the non-rhotic (or r-dropping) accents of most of England, the name Eeyore would be pronounced \EE-aw\. It’s simply because of the transcription that most Americans wouldn’t read Eeyore as the noise a donkey makes.

There are other examples of transcriptions of British English that may be confusing to (or at least read differently by) Americans. One is the use of larf to represent a spoken or informal use of the word “laugh” in British writing:

EastEnders team is 'avin a larf–but the best ones are all unintentional
—Ian Hyland, mirror.co.uk, 5 December 2016

Keith Richards is routinely referred to as Keef in a similar way, and, perhaps most notably, hesitation noises are transcribed differently on either side of the Atlantic: for um, British writers often use erm, and the American use of uh or ah is spelled er in British English. Read with an r-dropping accent, these transcriptions make much more sense. And in the Pooh stories, Piglet’s favorite food, acorns, is spelled haycorns, reflecting the common British dialect pattern of dropping initial h from words. In the animated versions of Pooh stories, Christopher Robin always has a crisp British accent, but Eeyore was given a deep American voice by Ralph Wright, who was a Disney animator. Those who called Eeyore by name at least got the sound right.