An Irresistible Piece On 'Dessert Stomach'

There's always room for another article.

When you think you've eaten all that your stomach can really handle (and on those especially gustatory occasions, a bit more so), you might say that you are "full," "replete," "sated," "satiate," "satiated," "stuffed," or "surfeited." But by the time you figure out what word fully expresses how you feel, the topic of dessert comes up and your stomach somehow gets a second wind. It might surprise you to suddenly be in possession of a "dessert stomach," "dessert compartment," or "dessert shelf"—all terms designating the phenomenon of your stomach saying "yes" to dessert and you saying "why?" (But really how could you say "no"?) Each term implies that the stomach finds space to provide dessert a room of its own. 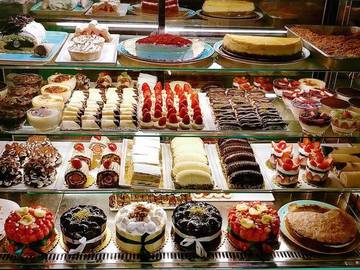 If we get one, will you split it with us?

You eat a delicious, satisfying dinner, feel full to the brim, but when the beautiful question "Should we get dessert?" comes around, it's always a yes—much to our stomach's dismay afterwards. It's true, we always have room for desserts, whether we indulge that sensation with dessert or not (kudos if you have the willpower). But why exactly does this happen? According to Russell Keast—a professor in sensory and food science and the director of the Centre for Advanced Sensory Science at Deakin University—there's a scientific reason for the phenomenon called sensory specific satiety, or "dessert stomach."
— Juliette Steen, The Huffington Post (Australia), 27 Jan. 2017

Throughout history, even in the caves of Neanderthals, legend says children have maintained they are so full it would be impossible to swallow one more bite of mastodon spleen or even a single Green Giant pea. Yet, miraculously, seconds later, the same youngsters can profess discovery in their stomachs of a little-known dessert compartment, which is, by good fortune, quite available for filling with cookies, cake or ice cream. Parents suspicious of such timely, documentation-free claims should note now that, in fact, such a compartment has been found by British researchers. It's just not in the stomach; it's in the brain.
— The Los Angeles Times, 2 Sept. 2003

It's a gastronomic phenomenon that some call the "dessert shelf": the remarkable ability of many a Thanksgiving eater to feel completely full after the main course, yet still have room for dessert. Of course, the ability to eat sweets on a full stomach isn't limited to Thanksgiving, but it’s especially apparent after the holiday feast. What makes this possible? Scientists have long known that a hormone called ghrelin, which is produced by cells lining the stomach, plays a role in inducing appetite. A counterpart hormone called leptin, which produced in fat cells and other types of tissue, suppresses appetite. When levels of ghrelin in the bloodstream are high, we feel hungry; after eating, ghrelin levels drop off and leptin levels increase, signaling to our brain that we're full. That, anyway, is how it's supposed to work.
— Joseph Stromberg, The Smithsonian, 20 Nov. 2012

Theories on the phenom vary. Perhaps your stomach simply got bored with what you've been feeding it, and it signaled your mind that it wouldn't mind having something sweet (instead of the meaty or savory foods whose company you've enjoyed for the past hour); psychologically, you simply can't resist the sight and smell of something sweet; or, physiologically, you expelled (discreetly, of course) some gas to make room.

Another is that the mind is fully aware that the stomach will "relax" to make room for dessert, which is based on research that suggests that glucose allows the stomach to depressurize, and itself wouldn't mind some sweet sensation. If that's the case—apparently, our minds do, in fact, play tricks on us.

"It appears that three factors collaborate in triggering the relaxing reflex," explains [Arnold] Berstad. First of all, the sight and smell of food and the process of chewing and swallowing it have an effect. Secondly, the pressure of food against the stomach has its important impact. And thirdly, the duodenum "tastes" the components of the food. All this information goes to the brainstem through particular nerves. A message is sent out again from the core of the brainstem which oversees the relaxation of muscles in the stomach wall, according to Berstad. And so to dessert. Glucose—or sugar if you will—stimulates this relaxation reflex. "In this way it can decrease the pressure on the stomach and reduce the sensation of being full. A sweet dessert allows the stomach to make room for more food," the researchers write in the medical journal.
— Ingrid Spilde, ScienceNordic.com, 19 Dec. 2011

There is also the appetite-inducing hormone ghrelin (a.k.a., "the hunger hormone") to consider as a reason why we crave dessert. Ghrelin acts to stimulate appetite, but its secretion increases before meals and decreases after food is consumed. So this theory hinges on the fact that dessert is a meal—we can't argue with that—and is dependent on other factors, such as the re-stimulation of appetite, which brings us to the sensory-specific satiety hypothesis. Sensory-specific satiety suggests we become bored with the consumption of the same food or flavor, and in the end we either stop eating or seek something else (like ice cream).

As confirmed non-scientists, we can't say whether the dessert stomach/compartment/shelf is real or not, but we have experienced the inexplicable phenomenon of indulging in dessert after a big meal and are willing to pretend it is. So, feel free to eat that dessert—your body, mind, and stomach will be delighted and will make room for it.