Our most challenging yet!

A socially inept or stupid person 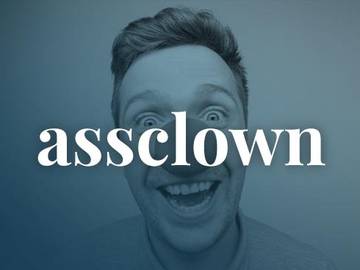 What does assclown mean?

An assclown is a socially inept or stupid person.

Where did assclown come from?

Assclown (also spelled ass-clown) made its filmic debut in the 1999 comedy Office Space directed by Michael Judge. In the movie, the character Michael Bolton comments on his sharing of his name with the real-life singer saying, "There was nothing wrong with [my name], until I was about 12 years old and that no-talent assclown became famous and started winning Grammys." In time, the movie became a cult favorite, and the term assclown began to go viral. Viewers of the film started to incorporate it into their everyday speech, blogs, and texts, making it a recognizable insult—even for people unfamiliar with the movie. The connotation of assclown is self-explanatory: a clown can be scarily silly (or all-out scary), and an ass is, well, an ass, or jackass, as an article in the June 12, 2016 issue of The Chronicle of Higher Education elucidates:

The ass, among types of persons, is slow to understanding. Perhaps he's dull, stubborn, entrenched in his position, or just plain stupid. The clown, by contrast, seeks to entertain an audience with playful pretending or comedic exaggeration, with sharp sensitivity to what others find amusing or delightful or shocking. Putting these two types together, there is such a person as an ass-clown, someone who seeks an audience's enjoyment while being slow to understand how it views him.

It should be noted that the vulgar "ass" slang terms are unrelated to the ass in jackass (the male donkey), unless they are in reference to being a stupid or obstinate person—qualities often attributed to the animal. Notably, ass is often used by the character Red Forman, the father figure in the late 20th- and early 21st-century television comedy That '70s Show, in this sense:

Red is also fond of using the word in its "vulgar" sense, as his son, Eric, brings up in an emotional exchange with his father:

Eric: Kick my ass, put your foot in my ass, make my ass a hat…

It is reasonable to assume that the vulgarity of ass, meaning "buttocks," has tainted the word ass, but as a name for a donkey or stupid person, evidence shows jackass to be considered as acceptable as any other non-vulgar epithet (like idiot or jerk). However, you may want to choose another word in the company of sensitive people if their recriminations bother you.

The second element of assclown (clown) might also cause revulsion, since not everyone is a fan of the made-up performer bearing the name who simply wants to make people laugh. Although the familiar entertainer has, today, lost any association with the country, clown originally meant "farmer" or "countryman" and it can be traced back to the 16th century. The lower social status and supposed boorishness of people in the country led to the more disparaging sense of "a fool, jester, or comedian."

If you find that you are in the company of an assclown, it's probably best you walk away or converse with someone else. If you encounter a clown dressed as a complete ass, laugh—unless you have coulrophobia, in which case you'll be running away.