Prejudice or discrimination against young people as a group 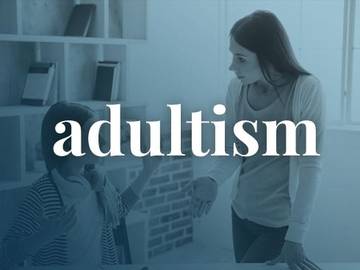 What does adultism mean?

Adultism refers to prejudice or discrimination against young people as a group.

Where did adultism come from?

When people think of discriminatory isms, racism and sexism are the first to come to mind. However, there are a slew of isms in today's world—many of which people might observe but cannot identify by name, including ableism, sizeism, lookism, and adultism. Some might consider adultism to be the same as ageism, but to a child or teenager, they are not the same. By definition, ageism is prejudice or discrimination against a particular age-group, but actual usage indicates that it is primarily used in reference to the elderly—and the kids know that.

Adultism, on the other hand, implies prejudice or discrimination against young people in particular, and that sense of the word goes back to at least the mid-20th century and became firmly established in the language by the late 1970s and early 80s.

How is adultism used?

Young people experience adultism in many ways. They are too young to vote, but old enough to be drafted. Young people are thought to be irresponsible and selfish. They are considered too ignorant about life and the world to make their own decisions.
— Marcie Telander, Acting Up!, 1982

Adultism did have earlier use, however, that referred to the state of being an adult (applying the suffix -ism meaning "state").

There are three standards of adultism—legal, lawful and mature age. Legal age is fixed at twenty-one years, because the consensus of profane legislative opinion has designated this conventional period as the time when adultism begins in the social relations.
— The Freemason's Repository, April 1889

Adults should be adults and let children be children as this citation of the early sense of adultism suggests:

The undue interposition by the adult of his adultism—his point of view—between himself and his child is the main, if not the only real, hindrance to the child's proper development. Until we can see our adultism objectively, as the rock of offense, we are not likely to take steps to remove it. If our child-study does not help us in this direction we might well question its validity. At all events, let us concede to childhood the first right to the significance of child-life. Let us beware of misappropriating the spiritual income of the invested capital of childhood. Let us see in the child something more than a symbol for our own emotions. Let us not obstruct his development by selfish adultism.
— Patterson Du Bois, Health Magazine, October 1901

Adultist: there's a name for your adultist behavior and it will be called out by knowledgeable young people who want a say domestically, intellectually, and politically.