A study by the Pew Research Center found that fewer Americans identify as "Christian" and that the number of people who claim to belong to no organized religion has increased. According to the study, "as the ranks of the religiously unaffiliated continue to grow, they also describe themselves in increasingly secular terms," including "atheists," "agnostics," or "nothing in particular." 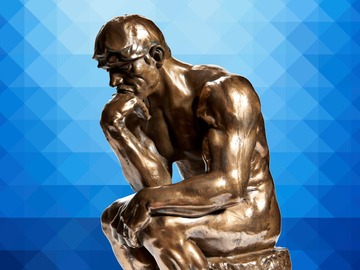 Secular means "of or relating to the physical world and not the spiritual world" or "not religious." It comes from the Latin word that evolved from meaning "generation" or "age" to meaning "century" (taken as the extreme limit of a human lifetime). From this notion of a period of time or "the present time," it evolved to mean "the present world," as opposed to the seclusion of monastic religious life, in order to identify clergy who worked in churches among the people. From there, it was only a step to today's meaning of "not religious."

Secular came to English from Latin through French; in modern French the word siècle means "century."

Though atheist and agnostic are words that are often used together or cited in similar contexts, they do not mean the same thing. Agnostic comes from the Greek word meaning "unknown" or "unknowable" (a-, "not" or "without," and gnōstos, meaning "known"). It means "a person who does not have a definite belief about whether God exists or not" or, more broadly, "a person who does not believe or is unsure of something."

Atheist also comes from Greek, from a- meaning "not" or "without" and theos, meaning "god." In English is simply means "a person who believes that God does not exist."

For more detail, see the original Pew Research Center study, as well as their survey overview.