Just try and stop us

Some people will try and tell you that you shouldn't say "try and," but should instead say "try to." 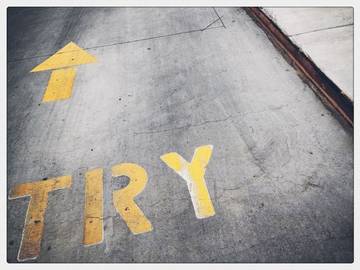 Go ahead. You know you want to.

The crux of the complaint about try and is the assertion that when the verb try is followed by an infinitive verb, as it often is, that infinitive verb needs to be preceded by to. The assertion, however, isn't based in any rule about infinitives: infinitive verbs do their jobs without to frequently, as perfectly grammatical sentences like "We saw them leave" demonstrate.

Not only do infinitive verbs not require to, but and is a long-established partner in the same position—that is, between a verb and an infinitive following it. The construction has been around since the 13th century, when it mostly occurred with infinitives following begin, take, go, and come. Today it's used with go and come ("Go and ask them," "Come and see"), as well as with other verbs: "Wait and let me finish," "Stop and chat for a while."

Try and appears to date to the 16th century, which is when an early iteration of our most familiar use of try (meaning "attempt") was first established. The Oxford English Dictionary's first example of try meaning "to put to test or trial," as in "try one's luck," features try and:

I will aduenture, or trie and seeke my fortune.
— John Baret, An aluearie or triple dictionarie, in Englishe, Latin, and French, 1574

A century later, the "attempt" meaning is evidenced, with the OED's first example showing try and, not try to:

They try and express their love to God by their thankfulness to him.
— J.S., The History of Monastical Conventions and Military Institutions, 1686

The oldest example of try to in the OED is from shortly after that, and in an inverted construction:

To repair his Strength he tries: Hardning his Limbs with painful Exercise.
— John Dryden, translation, The Works of Virgil, 1697

Try and, it seems, is almost certainly older than try to.

Try to does some other things that try and can't really do, like function in inflected forms:

They tried to explain.

*They tried and explain.

Or be split by an adverb:

Or be split by a negative:

Try not to fall.

*Try not and fall.

But try and persists in other constructions. Despite complaints that span two centuries, try and has appeared and continues to appear in the writing of some of the language's most competent users:

He was told that the Duke of Wellington had gone to try and rally his army, the advance of which had been utterly crushed the night before.
— William Makepeace Thackeray, Vanity Fair, 1848

Caleb was a powerful man and knew little of any fear except the fear of hurting others and the fear of having to speechify. But he felt it his duty at this moment to try and give a little harangue.
— George Eliot, Middlemarch, 1871-2

He began to think that he would try and restore himself to his old state. He would return the miserable thievings of the night and explain.
— Theodore Dreiser, Sister Carrie, 1900

… Minor became truly remorseful for what he had done, and resolved to try and make some kind of amends.
— Simon Winchester, The Professor and the Madman, 1998

It was the same hike Captain Cook took—I could just imagine him, sweating in his heavy British naval uniform and clumsy shoes—to try and fathom a way out of the nightmarish reef.
— Tony Perrottet, Islands, September/October 1999

… I could hear her aunts and her mother in the doorway of the flat, telling each other that at this hour of the night they should try and control their tears for the sake of other residents.
— Thomas Keneally, The Tyrant's Novel, 2004

Many of these examples are somewhat informal in tone, but none of them are nonstandard. You should feel free to use try and where it seems appropriate, but be aware that some people will try and tell you you're wrong to do so—in which case, you can point them here.

In summary: When try is used to mean "to make an attempt at" it's often followed by an infinitive phrase, as in "try to explain." A lot of people don't like it when and appears in place of the to: "try and explain." There is, however, nothing wrong with try and, and you should feel free to use it. It's most at home in informal settings, but is not grammatically problematic and is in fact about the same age as (and is very possibly older than) try to.