A Podium Is the Same Thing as a Lectern

We'd say it from a podium if we had to

We are very sorry to inform those of you who care about this matter that the word podium can truly and without embarrassment refer to what is also called a lectern. 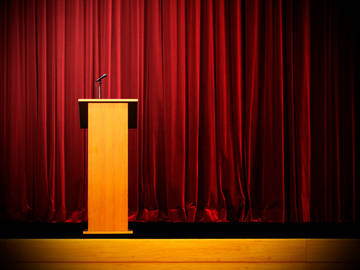 This is a lectern. But it is also a podium.

But let's back up a bit. Podium in its original English use was an architectural term. The word first referred to a low wall serving as a foundation or terrace wall; one early kind of podium was the kind that went around the arena of ancient amphitheaters and served as a base for the tiers of seats. The word comes from the Latin word podium, and traces back to the Greek word podion meaning "base." Podion in turn comes from the Greek pod- (or pous), meaning "foot," which we see in the word podiatrist.

There are plenty of people who would like to see the ideas of "base" and "foot" preserved in all modern uses of podium, which is why we have an apology to make: the word podium sometimes refers not to a thing you stand on—that is, a thing that supports your feet, a base—but to a thing you stand behind and use to place notes, a book, or whatever else you're glancing down at as you address or read to a group of people. You know the object: it usually has a slanted top surface and a place to stow a bottle of water or two underneath. It might go all the way to the floor or sit on a table.

If you're frowning deeply as you read this you likely know the object as a "lectern" (a word from Latin legere, meaning "to read"). And it is indeed a lectern. But lecterns are also sometimes referred to as podiums (or podia, if you want to use a plural that nods to the word's Latin history), at least in North America. And this has been true since around the middle of the 20th century.

The apology we made a couple paragraphs above is, of course, a little facetious. An apology implies an admission of error that we simply cannot make here in good faith. We have nothing to do with an expansion of the word podium to cover lecterns. Words frequently take on other meanings over time, and it is our mandate to report those meanings if and when they become established. Podium is in fact used as a synonym of lectern in published, edited prose by skilled writers. And we'd say it from a podium if we had to.