Vice and vise: they're homophones, which means they sound alike, but have different meanings. And we do mean different. 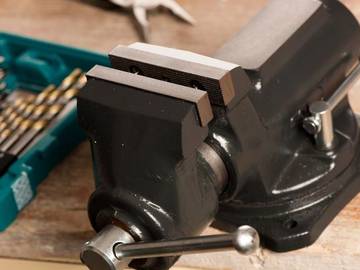 Vice is the more common of this pair. Often contrasted with virtue, vice is used to refer to a variety of inadvisable acts and behaviors, from the merely blush-inducing to the truly scandalous. Minor foibles and bad habits can be described as vices, as can actions of such moral depravity that even regular readers of the most salacious tabloids are shocked, yes, shocked.

The word is Latin in origin, tracing back to the word vitium, meaning "fault, vice." It entered English by way of Anglo-French during the 14th century.

The word vise is another thing entirely. It refers to a tool with two jaws for holding something. The jaws can be closed, usually by a screw, lever, or cam. A vise is handy, for example, when you've glued something together and need to keep it still while the glue dries. The word vise is also used figuratively to refer to something that is like a vise in the strength of its hold, such as "a vise of debt."

Vise is a little younger; it dates to the early 16th century. It too traces back to Latin (to the word vitis, meaning "vine"), and entered the language by way of Anglo-French.

And that's the story on these two. It's satisfying, we think, how distinct these are. The tool has an s, the moral fault has a c; keeping them straight isn't so very onerous a task.

Except, this is English. Chances are it's not that simple.

And it's not: in British English vice is also used for the tool—that is, to spell vise. And historically, vise has at various times been the preferred spelling for both. Which makes it all a bit of a muddle.

For our part, we'll stick by this recommendation for readers on the American side of the pond: use vise for the tool and vice for the bad habit.

Before we leave this topic entirely, however, we'll take a moment to address vice in two other incarnations. The familiar vice- in vice-president and vice-chancellor is a prefix—hence the hyphen attached to it. It comes from a hyphenless vice we have not as yet mentioned. That vice is a preposition meaning "in the place of" or "rather than." It appears in formal statements like "I will preside, vice the absent chairman," and comes ultimately from Latin (by way of Anglo-French through Middle English), from vicis, meaning "change, alternation, stead," making it unrelated to either the tool or the fault.