Versus and verses sound alike but are different words. Versus means “against” and is often seen abbreviated as vs. and v. Verses is the plural of verse, meaning “a part of a poem, song, or chapter of the Bible.”

Merriam-Webster produces dictionaries which are in the descriptivist tradition (meaning, for instance, that we describe the use of which in nonrestictive clauses as entirely acceptable, based on the word’s breadth, consistent meaning, and history of use). Some of our users occasionally express an interest in our taking a more prescriptive role, one in which we levy judgment on language use. We have even been accused, by some of our more impolite readers, of exhibiting an ‘anything-goes’ approach to language, due to our having defined words such as conversate and irregardless.

It hurts our feelings when such accusations are leveled (no it doesn’t). These words were added to the dictionary after exhibiting well over a hundred years of regular use with a specific meaning. We don't simply add every new word or usage that comes along. As an example of how descriptivism is not just an embrace of the ‘if someone uses the word zirq to mean “the ineluctable desire to correct the language use of one’s peers, particularly when such corrections are uncalled for,” then, by golly, we’d better define it right away’ school of lexicographic inquiry, we present the words versus and verses. 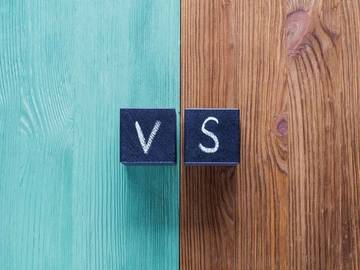 Our approach is closer to 'some things go, in their own time and when they're ready.'

Versus and Verses Meaning

Versus is a preposition, with the meaning of “against,” or “in contrast to or as the alternative of.” In use in English since the 15th century, the word comes from the past participle of the Latin vertere, meaning “to turn.” Verses is either the plural form of a noun (“a line of metrical writing”) or the third-person singular form of a not-terribly-common verb (“to make verse”). The meanings of these two words are quite distinct, yet due to a resemblance in appearance and sound people will occasionally use verses where versus is called for.

”Personally I don’t really like it for wrestling to go to a class sport,” Seymour coach Dave Urbanski said. “I don’t want it to take the zing out of basketball. I like the you verses the world attitude.”
— Jackson County Banner (Brownstown, IN), 16 Jan., 2001

We do not countenance such use. However, this does not mean that we point our fingers at people who use it thusly, and laugh and snigger. It simply means that we do not provide variant forms of versus (the way we do for its abbreviations, which may be rendered as vs, vs., or v), as such use is not widespread or established enough to warrant inclusion.

Subjunctively muttering his curses
Mr. Smith has a grudge he still nurses
“Were it up to me,
I’d beat them, you see,”
For confusing verses and versus.”

In summary: Versus and verses are homophones ("one of two or more words pronounced alike but different in meaning or derivation or spelling'), so no one will notice if you substitute one for the other when speaking. However, these words have distinct meanings, and should not be swapped in writing. Versus is a preposition, meaning "against," and verses is generally the plural form of the noun verse.