'Venom' and the Goddess of Love

Venus may have had something up those invisible sleeves of hers

Etymology frequently involves at least a little guesswork, but it's educated guesswork. In the case of the word venom the educated guesswork takes us back to that lovely lady famously perched by Botticelli in the open scallop shell. You know the one: Venus, the Roman goddess of love. 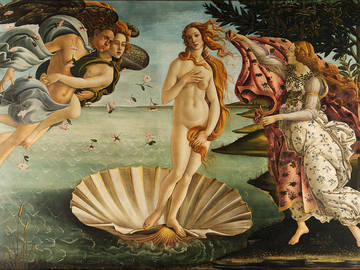 The goddess Venus gave her name to 'venesom', which became the Latin 'venenum' meaning "magical charm, potent drug." From there, it was just a short step to the word 'venom' and the meaning "deadly substance, poison."

Venom and Venus: the similarity seems to end at the third letter, but etymologists think not.

Before Venus referred to the goddess, the word meant simply "charm" or "epitome of qualities that arouse sexual desire." The word obviously fitted the goddess to a T: she does, after all, personify sexual attractiveness, which makes her very charming.

But here's where some guesswork comes in: although it doesn't appear in any texts, etymologists believe a noun stem venes- underlies the later attested Latin word venus because of the existence of the verbal derivative venerari, meaning "to solicit the favor of (a deity), worship." (Venerari is also the source of English word venerate.) Given this derivative and the meaning of Venus's name, venes- is believed to have meant "magical charm" or "magical power to appease the gods." Venes- has another derivative too, reconstructed as venesom, which became the Latin venēnum meaning "magical charm, potent drug." From that meaning it was just a short step to the sense "deadly substance, poison."

The "poison" meaning appears in Old French in the form venim, which Middle English borrowed as venim or venom. Oh Venus, you wily goddess you. Makes you wonder just what she's thinking in that seashell pic.