Sit back and enjoy some reading.

Vacation is perhaps one of the most euphonious words in the English language, if only for the images it evokes: a lazy poolside afternoon, a stroll along cobble-stoned streets, hours of uninterrupted reading in a cozy chair, a day-long trek under a forest canopy, a nap in earshot of lapping waves, a stumbled-upon bookstore full of unread treasures, a perfect morsel consumed while overlooking … uh, sorry about that. We appear to have been distracted for a minute. We'll try to keep to the point here, which is, of course, words, and in this particular case the word vacation itself. 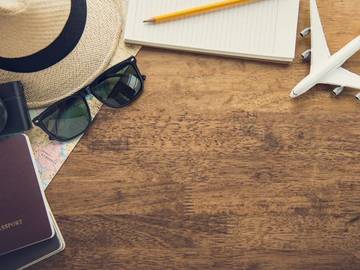 Etymology just living in the moment, only a few phones in sight

Earliest Use of 'Vacation'

It's somewhat comforting, we feel, that it is not a new word. The earliest known example of vacation occurs in Geoffrey Chaucer's 14th century Canterbury Tales, in the famously bawdy (and alarmingly violent) Wife of Bath's Prologue:

And every night and day was his custume,

Whan he had leyser and vacacioun

To reden on this book of wikked wyves.

The Riverside Chaucer translates vacacioun here as "spare time," but in the phrase "vacacioun from other worldly occupacioun" we have a familiar collocation that rings with a still-current meaning of vacation: "a respite or a time of respite from something; intermission." "When he had leisure [=freedom, spare time] and vacation from other worldly occupation" isn't so very different from "when dad/mom gets a vacation from cooking dinner 7 nights a week," despite the centuries between those phrases.

Like so many words that joined the language in the Middle English period, vacation comes from Anglo-French, the particular kind of French spoken in medieval England, and ultimately from Latin: vacātiōn-, vacātiō means "exemption from service, respite from work," and traces back to vacāre, "to be empty, be free, have leisure."

Vacation simmered along in English from the 14th century to the present, developing semantically as one might expect. It took on now-obsolete meanings of "freedom from work or cares" and "time for contemplation," and still-current meanings to do with periods of exemption or suspension from work or activity, and with intermissions in judicial and educational contexts. In the late 19th century, it developed its now most common meaning of "a period spent away from home or business in travel or recreation"—what the British call a "holiday"—and it also got verbed, so that we could talk about "vacationing at the shore."

Other Meaning of Vacation

But there was a point in its history at which it also showed itself to be at the mercy of morphology. You know the word locate? And how it's got location? And relate has relation, and translate has translation, and so on? (Note that this pattern is not universal; we have ovations without ovates, invitations without invitates, etc.) Well, in the first half of the 17th century, the lawyerly English-speaking people wanted to use a good, solid Latin-pedigreed word to mean "to make legally void; annul," and they chose vacate, from vacātus. This led to the "act of vacating an order or legal proceeding; annulment" meaning of vacation, and eventually (as vacate developed further) to the "an act or instance of vacating (something, such as an office, post, or house)" meaning of the word. The meanings aren't such a radical departure as one might think though: like vacation, vacate is ultimately from vacāre, which along with meaning "to be empty, be free, have leisure" also means "to annul."

The vacate-related meanings of vacation are far from common, and hardly seem suited to vacations, so we'll stop there and save any further ruminations on them till after we return from ours. That bookstore is calling us.