Using the Dictionary to Write Poetry

Yes, the dictionary can help you write poetry

For World Poetry Day, we're reposting this article by the poet Dara Wier. Her dozen books include You Good Thing (Wave 2013) and Selected Poems (Wave 2010); other books and chapbooks include Reverse Rapture (a book length poem, Verse Press 2007) A Civilian's Journal Of The War Years (Song Cave 2012) and We Would Like To Return The Scarf To You In Good Condition (Small Anchor, forthcoming). She directs the MFA Program for Poets and Writers at the University of Massachusetts Amherst.

I keep an unabridged Merriam-Webster across the room from where I write. I visit it maybe 15, 20, 30 times during the course of any one-to-three-to-five-hour writing session, maybe, on average, 5 days a week. If my brain on its own works to provide surprising combinations, associations, thoughts, images, speculations, music, moods, tones and logics, my dictionary on its own works to provide my brain with good solid always-relevant information, and amplifications; the singularity of any given word first—how it looks, what it says, how it sounds, from where it comes—next, that word’s companion words, and maybe most significant of all, random words I meet along the way. 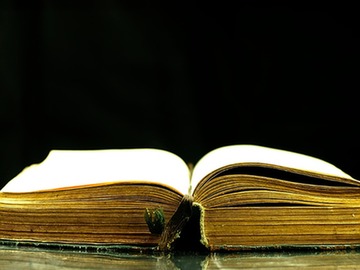 "My brain’s actions depend on words. Nothing much would be going on in there without them."

These detours away from where I think I want to go, these might be noted as distractions but these sometimes serendipitous, sometimes contradictory forays often turn out to be among the crucial fueling ingredients my writing depends on for inspiration, addition & texture.

I might think what I want to know more about is oblivion but what I find is the obliquity of the ecliptic and the many facets of metamorphosis and finally, forgiveness in sense 3 with the official ignoring of offenses.

I think I need to spend some time with safari but what arrests my attention are salient, sadomasochism, saccadic, and salad days. I think I will go learn more about coral only to learn a lot more about corollary and counterturn and coffin nail. I go from magnificence to means to marquee to maniac to distyle, ductile, hindsight, shell game, veronica, yardstick, ball field, magpie, variegated, and close shave.

My brain’s actions depend on words. Nothing much would be going on in there without them.

While I’m aware of the nebulous, ineffable, mysterious all-that-is that also makes up what passes for my consciousness (Webster’s Third New International, page 482, senses 1 a, b, and c), I never forget to worship at each letter's letting go of its individuality in service to its contribution to wording.

I will never admire sufficient to the magnificence of its character the feeling of simultaneity—coalescing, combining, and condensing that accompanies the procession of building a sequence I eventually call a thought.

To be able to stand in that mystery, as burning, as fact, as miraculous as water, as circulation, as gravity, as the very air I breathe, as illusion, as chimera, as life sentence—to be able to stand near it, will always send me to words.

And it’s not just a unique, individual word I meet when I spend time in a dictionary. I admire and depend on the lexicographer’s careful definitions. Each collection of which is any given word’s story; all those definitions telling about a word’s history, character, potential, strengths and weaknesses. I can see if the word is stable, unstable, in flux or in disuse, if it’s fairly expensive or economical. I can sense if it’s tricky. I can feel if it’s needy. I can sense if it’s been through the wringer of history or if it’s fairly new on earth. I can feel if a word’s been used as a weapon or a consolation. I can follow what science or medicine, romance or politics, astrophysics, alchemy or music or farming or fishing or commerce or chivalry needs it for. It’s like when we’re asked to say who and what we are. What do you do for a living? says someone new to you. Where are you from? What do you know?