Investors often conflate risk and uncertainty as being one in the same, but really, they are different concepts.
— Forbes, 19 Jan. 2018

… a politician whose public and private persona seem to be one in the same.
— Newsweek, 8 Sept. 2017

It had one of the most famous twists in cinematic history, revealing for the first time the family secret that Luke's father Anakin Skywalker and villain Darth Vader were one in the same.
— The Ottawa Citizen, 14 Dec. 2017

The phrase "one in the same" would be correct in the above statements if the writers are implying that risk/uncertainty, public/private self, and Skywalker/Vader are like Russian nesting dolls, where one is the same as the other and fits inside it—but we're guessing that's not the case. Rather, the subjects are two people or things that are thought to be the same or alike, and the intended phrase is "one and the same," which is used to emphasize sameness. 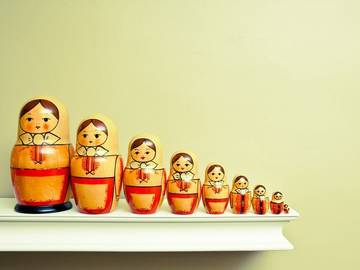 The redundancy of "one and the same" (same being a pronoun of one) is intentional and was formed along the lines of "each and every" and "any and all"—phrases that have frequently been condemned as redundant or trite by language commentators, but that are often found useful by the rest of us.

Forty years ago, with the stroke of a pen, President Jimmy Carter signed the legislation that created the U.S. Department of Energy (DOE), an agency that touches each and every American's life.
— Fortune, 4 Aug. 2017

The federal government stands ready to provide any and all assistance.
— Mike Pence, quoted on CNN, 10 Oct. 2017

If approved this summer, California's and the federal government's emissions policies would essentially be one and the same.
— Peter Fimrite, The San Francisco Chronicle, 27 Jan. 2012

Civil rights and labor rights have always been one and the same.
— Danny Glover, quoted in The Hartford Courant, 17 Jan. 2018

We can't say for sure when the eggcorn "one in the same" got started, but we do know that using "in" makes the phrase, well, a bit nonsensical. The misinterpretation is from the fact that, in ordinary speech, "and" tends to get contracted to "n." This has led people who are unfamiliar with the set phrase to incorrectly transcribe it as "one in the same."

"One and the same" goes back to the 16th century and comes from classical Latin ūnus et īdem. Please try to avoid misinterpreting this venerable phrase.