A Talk on 'Pronounce,' 'Articulate,' and 'Enunciate'

We'll make things clear for you.

Pronounce, articulate, and enunciate—and their respective noun forms, pronunciation, articulation, and enunciation—are words used when speaking of the production of speech sounds. These word pairs have distinct as well as similar meanings, which we will clearly and cogently discuss. (At the end, you'll be introduced to a pair of relatively unfamiliar cousins of this word family that you can add to your vocabulary.) 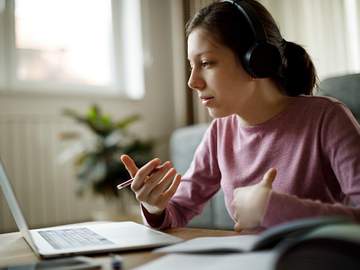 Just so we're all on the same page

The Meaning of 'Pronounce'

Pronounce derives from Latin pronuntiare, a union of the prefix pro- ("forth") with the verb nuntiare ("to report or declare"). To pronounce a word, syllable, digraph, or letter is to sound it aloud according to the established rules governing the language—or according to the unconventional rules of dialect. Here are a few basic examples of the verb: "The students practiced pronouncing the new spelling words"; "Colonel is pronounced the same as kernel"; "The k in know is not pronounced." Pronounce in this sense has a noticeable linguistic quality. The verb, however, is also generally used to mean "to say or speak a word or speech sound correctly," as in "The teacher had trouble pronouncing the student's name." Its noun form, pronunciation, likewise, refers to the way in which a word or speech sound is spoken according to the language's rules. Additionally, it is used to make reference to a particular person's way of pronouncing words: "The spelling bee's pronouncer has flawless pronunciation."

The Meaning of 'Articulate'

Articulate derives from Latin articulāre, meaning "to divide into distinct parts." The verb can mean "to express an idea, thought, feeling, etc., in words" (e.g., "He found it hard to articulate his feelings"), or it can mean "to say [pronounce] a word or speech sound in a way that can be clearly heard and understood" ("She spoke slowly, articulating each syllable"). If told to articulate your words, you might be mumbling or slurring, or perhaps speaking too slowly or softly so that listeners cannot clearly hear and identify each word because you are not being articulate.

Articulation is the related noun form of the verb articulate. It refers to the act of expressing something in words—for example, "The collection of essays is an articulation of the author's most personal thoughts." Technically, it is a word for how clearly and understandably a particular individual forms, or pronounces, the sounds that make up a word. Enunciation also shares this sense, as illustrated in these examples:

Actors try out a range of salty brogues that pitches much of the dialogue in a sea of confusing accents. However, [Johnny] Depp takes the opposite approach with precise enunciation of every line in what is best described as an accent-less accent.
— The Hollywood Reporter, 25 May 2017

He blazed through his set, delivering each line, each syllable of each word with perfect articulation and fervor.
— Katie Karpowicz, Gapers Block, 16 Nov. 2012

The Meaning of 'Enunciate'

Enunciate is a synonym of both articulate and pronounce. It can refer to the act of saying a word or parts of a word fully and distinctly, as articulate does, or correctly, which pronounce signifies.

So it's a word finding difficulty. ... The fact that she's speaking, that she's enunciating as well as she is. She's coordinating the movements of her mouth. All much better than, you know, we heard how she was doing before. Those are all good signs. This word finding difficulty or word sound often does improve, especially as she's had this much improvement at 10 months.
— Sanjay Gutpa, quoted on CNN, 15 Nov, 2011

Whistle in the Dark also starts with a pause (must be a point of style). Woman stands staring in her dining room, shards of crockery on the floor, then she sweeps them up. Gets livelier, though. It's a "fightin' Irish" play, with Dada shootin' the blarney and eggin' (there are no final consonants enunciated on stage) his brawlin' brood into fightin' another clan.
— Bob Mondello, The Washington City Paper, 22 Oct. 2012

Like pronounce, enunciate derives from Latin nuntiare, meaning "to report or declare." Both enunciate and enunciation can denote stating, announcing, or declaring something, such as a law or principle.

Now the aforementioned introduction. Phonate and phonation are technical words for the making of speech sounds, as shown here.

Learn about American Sign Language and the countless benefits of this valuable language. Our guest speaker, Holly Lorenz, who comes to us from Little Lark Signing Academy gained her knowledge from her daughter who was born unable to phonate.
— The Arizona Republic, 24 Feb. 2018

Vocal folds, sometimes called vocal chords are two rubberband-like tissues located, in the throat specifically the larynx. These folds vibrate and stretch together to create the sound that is the voice, also known as phonation.
— Savanna Allen and Sam Kunz, The Gateway (University of Nebraska at Omaha), 26 Aug. 2017

The cousins are from the combining form phon-, a Latin and Greek root meaning "sound," "voice," or "speech," which has given English such words as phonics, phonetic, among others.