What Does a Spelling Bee Pronouncer Do?

The pronouncer at the National Spelling Bee does much more than simply speak the words out loud. He or she provides all the information a speller can receive about that special word in the moment: its origin, its grammatical part of speech, and an example or two of its use in a sentence. 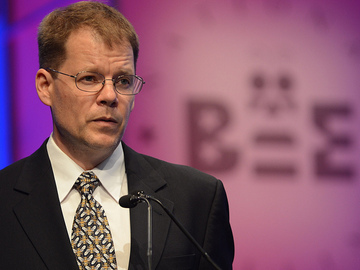 "Occasionally I have to tell them things that are in the dictionary that might mislead them."

The pronouncer might seem like the speller’s opponent. But at the opening ceremony for this year’s Bee, pronouncer Jacques Bailly made it clear that the Bee is a contest between the speller and the dictionary.

Dr. Bailly knows a lot about language: he’s a professor of Greek and Latin at the University of Vermont. He also knows a lot about the Bee: he won it in 1980. Merriam-Webster’s Peter Sokolowski spoke with him yesterday.

It’s just like in any sport: it’s not the person against the umpire. Basically, I have a certain amount of information that I can give, and I’m trying to give it accurately and emphasize it in such a way that it makes sense and just make sure the speller knows everything that could be relevant. Occasionally I have to tell them things that are in the dictionary that might mislead them just because they’re those tricky words.

Jacques used the example of mischievous, which shows \MISS-chev-us\ and \MISH-chev-us\ but also the variant pronunciation \miss-CHEEV-ee-us\, which is labeled as stigmatized and nonstandard. If a speller asks for all the pronunciations of this word, that third pronunciation could lead to an incorrect spelling.

The job of pronouncer takes extraordinary concentration over many hours of spelling during the Bee, and that’s one of the reasons that there’s an Associate Pronouncer sitting right next to Dr. Bailly, Dr. Brian Sietsema—a linguist who is the former pronunciation editor at Merriam-Webster.

He’s a tremendous resource. He’s sort of an unsung hero because if I ever say anything at all wrong or that isn’t complete, all he has to do is kind of move a finger, and I will notice that, and I’ll say: “OK, what did I miss?” to myself—and I’ll fill it in right away. People don’t realize that I’m being fact-checked, live, every single thing that I say.

When detailed etymological questions are asked (“Does this come from the Latin word for horse?”), it’s usually Brian who answers them, which allows Jacques to keep his focus on pronunciations.

It’s very dangerous to etymologize on the fly. There are words where it seems obvious that they’re from this root—but they’re not. So you can’t just go with your intuition. It has to be there in the dictionary. And also, our intuitions are limited ... we just go with what the dictionary says. That’s also why Brian never really says “No.” He only says “I don’t see that here,” and that’s really important because what he’s saying is: we’re using the dictionary. The dictionary is not actually complete as far as etymology goes. The etymology it has is a sort of scientific linguistic etymology, which is different from what the spellers are asking about. Because a lot of these words may have been formed in German, and that’s the etymology in the dictionary, whereas what the spellers want to know is: “Is it from this Greek root?” and the dictionary might not even list Greek behind the German always. So you want to know all those roots, because they’re going to help you spell the word, but, at the moment, when you’re up there on the stage, you can really mislead yourself by asking too many root questions and not being aware of the traps there.