The Unsteadiness of 'Drank' and 'Drunk'

How to use them responsibly

In modern usage guides, drank is the past tense of drink, as in "I drank a lot last night," and drunk is the past participle (following "have"), as in "Yes, I have drunk wine before." Throughout history, however, these words have been confused and used in their opposite contexts, perhaps because of the association between the word drunk and intoxication.

Perhaps you have, at some point, found yourself saying "I have drank..." or "I had drank...." Pretty reasonable. Or maybe you’ve used drunk rather than drank in the past tense while recounting a night out, or a very nice tea party. Also within the bounds of reason. So ... which time were you being grammatically correct? 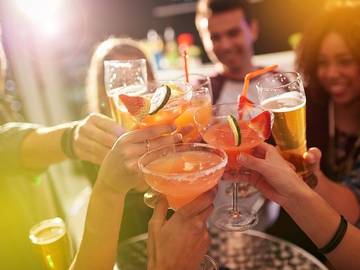 Most guides recognize 'drank' as past tense and 'drunk' as past participle.

I don't like energy drinks, but I have drank espresso in France before events!
— Chantae McMillan, quoted in The Performance Kitchen, 27 Apr. 2017

I needed to go to the toilet. I drunk a lot of water! If it was 1-0 I would have kept my position!
— Mauricio Pochettino, quoted in The London Evening Standard, 14 Dec. 2016

Though technically incorrect, drank used as a past participle (the form of the verb used with be or have, as in "I have never drank coffee") is not unheard of in speech, and drunk occasionally is heard in place of drank as a past-tense verb (“I lied before—I drunk a cup of coffee once”). Inflections of the irregular verb drink have seen unsteady use for centuries—even in writing.

The History of 'Drank' and 'Drunk'

According to the set rules for irregular verbs, drank indicates the past tense and drunk is the past participle. Other similar inflections are rang and rung for ring and sang and sung for sing. The Oxford English Dictionary notes, however, that drunk was accepted in past-tense usage from the 16th through the 19th centuries, and British Lexicographer Samuel Johnson gives past-tense drunk as a standard variant in his 1755 A Dictionary of the English Language.

... so we had plenty of meat and drink (though I drunk no wine, though mightily urged to it)….
— Samuel Pepys, The Diary of Samuel Pepys, 1663

... they had long, deep earthen pots, which they used to sink into the ground, to keep the water which they drunk cool and pleasant….
— Daniel Defoe, The Life, Adventures & Piracies of the Famous Captain Singleton, 1720

Heated and wearied as I was, I drunk freely of the goblet which he presented to me….
— The Marchioness of Lemington, Rosina, or, The Virtuous Country Maid, 1827

On the flip side, drank as a past participle showed up during the 17th century, and it seems to have been commonly used in writing throughout the 19th century.

NURSE. That, miss, is for fear you should be drank before you are ripe.
—Sir John Vanbrugh, The Relapse, 1696

... having read somewhere that cold water drank plentifully was good for a fever....
— Benjamin Franklin, Autobiography, 1771

Monboddo dined with me lately, and having drank tea, we were a good while by ourselves....
—James Boswell, letter, 14 Feb. 1777

… the monster disgorged all the water he had drank, with a force which sent the canoe with great velocity to the opposite shore.
— Mark Twain, Life on the Mississippi, 1883

It’s been suggested that this substitution of drank for drunk originated as a way to avoid the association of drunk with intoxication. Given the social emphasis on morality in past times, that thought seems sensible; however, saying "I had drank too much wine" doesn't hide the fact that you did indeed. Nevertheless, it is likely that this intentional avoidance of the word continues today.

Writers of early 20th-century handbooks, striving to make irregular verb inflection uniform in English, thought differently about drunk and prescribed it as only a past participle of drink that should be criticized when used for past tense.

Correct Usage of 'Drank' and 'Drunk'

… I ain't got no money for to buy the outfit, and I reckon I couldn't get none from home, because it's likely pap's been back before now, and got it all away from Judge Thatcher and drunk it up.
— Mark Twain, Adventures of Huckleberry Finn 1884

Drank, on the other hand, has gained a level of acceptance in spoken use.

Another phrase you may have heard is "I have/had drunken too much," as drunken was once a past participle of drink. However, since the 17th century, it has been mostly used as an adjective, and its function as a verb is now deemed archaic. Today, drunken is chiefly used attributively, as in "drunken partiers" or "a drunken brawl," and is a complement to the adjective form of drunk.

Now who’s in for happy hour?