Know which one you're paying for

A carat is a unit of weight used to measure the size of a gemstone such as a diamond. A karat is a measurement indicating the proportion of gold in an alloy out of 24 parts, so 18K gold is 18/24 parts gold. However, the use of carat (in place of karat) to indicate the fineness of gold is also considered acceptable.

The idea that bigger is better when it comes to precious stones was around long before the dawn of precise instruments for measurement. So, hundreds of years ago, when people needed some standard for weighing their gems, they turned to the carob tree. Since the carob's seed weighs approximately the same as the smallest gemstone, it was designated as the base unit for weight, and since the seed was called a carat, the name came too: any stone that approximated the weight of one seed was deemed to weigh one carat. 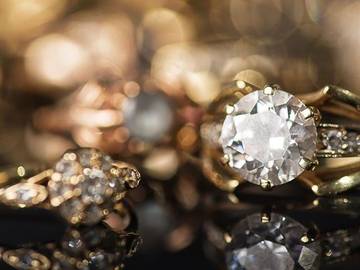 Both 'carat' and 'karat' to indicate fineness of gold are considered correct.

The name carat derives, via Medieval French and Italian, from Arabic qīrāṭ, meaning "bean pod," which is itself from Greek keration, referring to both the carob bean and a small weight. Early in the 20th century, the weight of the carat was set at 200 milligrams, or 0.2 grams. Thus, a 2-carat diamond weighs 400 milligrams or 0.4 grams.

The word karat is ultimately from the same source as carat but came to refer to the fineness of gold: one karat is equal to 1/24th part of pure gold in an alloy. (The 1/24th proportion goes back to ancient Roman times during which a siliqua was equal to 1/24th of a golden solidus. But you already knew that.) In other words, a 14-karat gold ring consists of 14 parts gold and 10 parts of some other metal, like copper; pure gold is 24 karats.

Although carat and karat have distinct meanings in the jewelry world, the words are frequently confused. Here are a few examples showing karat being used to indicate the weight of a diamond instead of the purity of gold.

… the buckles are made of sterling silver and 14K gold. Some of them have a 0.10 karat diamond toward the center.
— The Wyoming Tribune-Eagle, 31 July 2017

The bag—embellished with white gold and 18-karat diamonds—was sold at the first dedicated handbag sale at Christie's.
— The Mirror (UK), 12 June 2017

First came the robbery of his wife … in Paris, a violent affair that included the theft of the 20-karat diamond engagement ring he gave her, worth a reported $4 million.
— The New York Times, 5 Jan. 2017

The substitution of karat for carat in regard to precious stones is considered incorrect, whereas the reverse—using carat in place of karat to indicate the pureness or fineness of gold—is considered acceptable. (English strikes again.)

Flare Audio's 24K gold-plated earplugs sell for more than $250. A pair of rhodium-plated plugs go for nearly $400. As the proverb goes, silence is golden. It must be. How else to explain the special edition ear protectors plated with 24-carat gold being sold for $258.66….
— David Hochman, Forbes, 30 Aug. 2017

The man tried on several watches, and in the confusion, he pocketed an 18-carat gold Rolex wrist watch valued at more than $10,000.
— The Lexington (Kentucky) Herald Leader, 14 Aug. 2017

This use of carat as a variant spelling of karat in the assessment of gold goes back to the 16th century, so its acceptance in contemporary English is understandable.

Today, we commonly encounter both carat and karat in reference to fine jewelry, where size and quality are emphasized, with carat usually designating the size of a stone and karat designating the proportion of gold in an alloy.

It should also be noted that karat is often abbreviated K, as in "an 18K gold ring," but carat is almost always written in full.

An altogether different homophone is caret: the name for the wedge-shaped mark (^) that is used by copy editors and proofreaders to indicate the place where text is to be inserted. Its unrelated meaning makes confusion with the "diamond" and "gold" words unlikely—but, hey, we're the dictionary. We let you know about words. And while we're at it: carrot.