Having a Think About 'Another Think/Thing Coming' 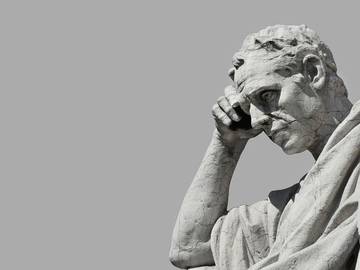 Read on for a sick Judas Priest reference.

If he thinks I'm going to sit around crying over him, he's got another thing coming. I can live without him, I can do without him just fine—but I don't like to lose.
— Paula Hawkins, The Girl on the Train, 2015

If anyone thinks any part of St. John's victory over Iona in the Holiday Festival ... was forgettable, the losing coach would like to tell them they have another thing coming. Said Tim Cluess, "Our guys are going to have these memories of playing in this for the rest of their lives."
— Mark Herrmann, Newsday (New York), 18 Dec. 2017

The neighborhood thought when Mr. Radley went under Boo would come out, but it had another think coming: Boo's elder brother returned from Pensacola and took Mr. Radley's place.
— Harper Lee, To Kill a Mockingbird, 1960

If you think the musical version of "Peter Pan" is only for kids, you've got another think coming. It's for everyone who believes in magic—even a little bit—because the Palo Alto Players production … is truly magical for anyone between 3 and 93.
— Joanne Engelhardt, The Chico (California) Enterprise-Record, 10 Nov. 2017

Those who use think think those who use thing have another think coming if they think they're right in using thing—and vice versa. Here's where we might lose some of you: we don't think there is any reason for reproving the other's usage. Yes, thing is meaningless here, leaving the "think" users to wonder what exactly will be coming, but think also leaves the "thing" users who are unfamiliar with the noun (which actually dates to the early 19th century and refers to an act of thinking) wondering if the statement is grammatical.

We have to say that those who question the noun think are probably American English speakers, since it is frequently used in British English.

Take the first week of the Christmas holidays to have a think. If the prospect of returning to university in January is still unattractive or fills you with dread, then maybe it's time to take stock.
— Sir Anthony Seldon, quoted in The Telegraph, 17 Nov. 2016

The noun did eventually float into American English, and in the mid-19th century, it became grounded in the expression "another think coming."

"By Jove, Ned!" he exclaimed. "I believe I have it." "Have what—a fit of seasickness?" "No, but these empty seats—the persons we saw you know—they belong there and they're afraid to come out and be seen." "Why should they be—if they're not the Fogers. I guess you've got another think coming." "Well, I'm sure there's something mysterious about those two—the way they hid their faces as they came on board—not appearing at supper—I'm going to keep my eyes open."
— Jane G. Austin, Outpost, 1867

"Another thing coming" dates later, which suggests that thing is an eggcorn of think. It probably originated in speech with the misapprehension of the "k" in think as being the "c" in coming, which leaves something that sounds suspiciously like "thing coming."

Semantically, the noun think is more fitting than thing: you think something and express your thought; then someone thinks you are wrong in your thinking and suggests you think about it again. (Notice the symmetry that think brings.) But the fact is the word thing is much more familiar, and it is trending with millennials (and U.S. presidents) who use the expression. If that trend continues, "another think coming" could well become an archaism. But this shouldn't come as a surprise: in the 1980s, the British metal band Judas Priest gave thing a major boost when they penned the lyrics to their hit "You've Got Another Thing Comin'." But of course they're no strangers to breaking the law.

In summary: Another think coming is the older of the two, dating in use to the mid-19th century, and originated in British English. Another thing coming appears to have come about in American English several decades later, probably as a result of confusion regarding the original phrase. Another thing is the more recent turn of phrase and now is more common, though it is frequently criticized.