There are certain words that look like they are synonyms, but in fact have definitions that are not terribly alike. Such words may have differences of meaning that are explicitly spelled out in their definitions (as when disinterested is defined as “unbiased” and uninterested as “not engaged”), but in other cases the ways and manners in which two word differ is not quite so overt.

An example of this may be found in the word unsatisfied and dissatisfied. The former is defined as “not satisfied,” and the latter as “expressing or showing lack of satisfaction : not pleased or satisfied”; these definitions are close enough that using the words interchangeably is quite excusable. However, there are circumstances in which one of these words is more apt than the other. 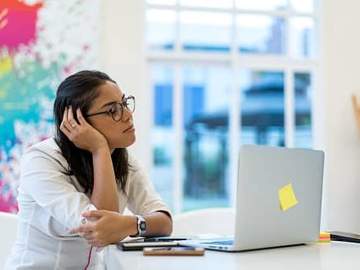 "I'm so, I'm so unsatisfied / I'm so dissatisfied"

One significant difference is that unsatisfied may be used of both human and nonhuman things; customers, parents, demands, and expectations may all be unsatisfied. When applied to each the word often carries the meaning of “unfulfilled” or “unappeased.”

Turning to the crisis in higher education, with a large unsatisfied demand in many former Communist countries, the report said the lifting of travel restrictions has raised fears of a brain drain.
— Alan Ridings, The New York Times, 8 Dec. 1993

Their greedy desires were unsatisfied, maybe even atrophied by the fear that been laying ambush to their hearts all the time and whose raw sting was now exposed bare, though unintentionally, by the old man's self-lacerations.
— Peter Palangyo, Dying in the Sun, 1977

Dissatisfied, however, is primarily used with respect to people or groups in the sense of “not pleased or gratified” (it would feel odd to read of ‘dissatisfied demands’ or a ‘longing that was dissatisfied’).

‘You are here, Joe Bengoh, because the staff are generally dissatisfied with your work,’ the speech tutor said, looking straight at Joe Bengoh.
— Yulissa Amadu Maddy, No Past, No Present, No Future, 1996

He pointed to the direction of his heart. ‘There is a hollow feeling here,’ he continued. ‘Some time ago I used to pour all the drink in the world into it to try and fill it up. I was dissatisfied with myself. That's what hollow inside means.’
— Bessie Head, When Rain Clouds Gather, 1995

This seeming incongruity can be explained by the fact that the word to which we are adding negative prefixes has a variety of meanings. Satisfy may mean “to make happy,” “to put an end to (doubt or uncertainty),” “to meet a financial obligation to,” or “to make reparation to (an injured party).” If you are uncertain as to which to use, employ dissatisfied with human subjects, and unsatisfied with either human or nonhuman, trusting, as always, your ear above all else.