'Unicorn': Nothing Is What It Seems

Poor Marco Polo. The 13th century Italian explorer had finally gotten a glimpse of a unicorn and he was sorely disappointed:

Their hair is like that of a buffalo, and their feet like those of an elephant. In the middle of the forehead they have a very large black horn…. Their head is like that of a wild boar, and is always carried bent to the ground. They delight in living in mire and in mud. It is a hideous beast to look at, and in no way like what we think and say in our countries, namely a beast that lets itself be taken in the lap of a virgin. Indeed, I assure you that it is quite the opposite of what we say it is. 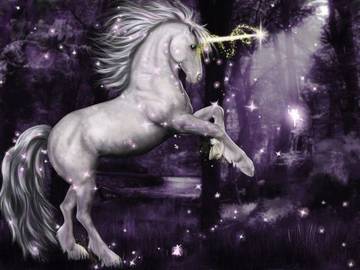 It's not hard to feel for him. Like the rest of us, he thought he knew what a unicorn looked like. Most of his contemporaries did too, as it was a very popular animal in the medieval equivalent of the Internet, i.e. art and literature. Just like today, medieval depictions of unicorns varied from artist to artist, but in general it was similar to the one we know: it was a horse-like (or goat-like) creature, pure white in color and dainty and refined in appearance. Unique to this marvelous animal was one long and tapering horn that grew straight out from its forehead. But where did this image come from? And what animal was Marco Polo so underwhelmed by?

First things first: we can blame the Greek physician and historian Ctesias for the kernel of the ideal unicorn. As Margaret Beam Freeman reports in The Unicorn Tapestries, Ctesias was the first person to write about the one-horned animal. She quotes from his book Indica, written around 400 BCE:

There are in India certain wild asses which are as large as horses and even larger. Their bodies are white, their heads are dark red, and their eyes dark blue. They have a horn in the middle of the forehead that is one cubit [about a foot and a half] in length; the base of this horn is pure white … the upper part is sharp and of a vivid crimson, and the middle portion is black. … Other asses, tame or wild … do not have an ankle-bone… but these do have an ankle-bone … the most beautiful that I have ever seen…. This animal is exceedingly swift and powerful, so that no creature, neither the horse nor any other, can overtake it….

This early description gave the world the image of the horse-like body, the white color, and the single horn, an image that would later be transformed into the medieval unicorn. (And note the ankle bone. Swoon.) But it seems clear from several of Ctesias's statements that he actually had the Indian rhinoceros in mind (or perhaps someone's description of it—Ctesias himself never visited India). The Indian rhinoceros and one other Far-Eastern species are the only land mammals with one horn (the two species of African rhinoceros have two horns). Ctesias mentions the pharmaceutical value of the horn from the "Indian wild ass"; rhinoceroses have suffered for centuries from the supposed value of their horns as aphrodisiacs and antidotes. He considered the wild ass very fleet and difficult to capture; the Indian rhinoceros, despite its lumbering appearance, is swift, and its capture is both difficult and dangerous. But the Indian rhinoceros has a massive, ungainly body, stumpy legs, and a thick, folded hide that looks like plates of armor. With the exception of its single horn, it is profoundly unlike the lithe unicorn of medieval art, and one can understand why Marco Polo wasn't exactly dazzled.

How did this huge and distinctly undainty beast get turned into a beautiful white horse? The beautiful ankle bone may have played a part, but a linguistic fumble likely shares some of them blame. We start with the word rhinoceros, based on the Greek rhin-, "nose," and keras, "horn," an accurate enough name for the animal. All rhinoceros species do have horns (more precisely, masses of compressed hairlike material), more or less on the nose. And what about unicorn? That means "one horn," from the Latin uni-, "one," and cornu, "horn." While this is a descriptive name for the rhinoceros, unicorn was originally applied to something entirely different.

When scholars were translating the Bible's Old Testament from Hebrew into Greek in the third century B.C.E., they encountered a mysteriously named animal. The Hebrew word for this creature was re'em, and the beast was evidently large and powerful. In Job 39:9–11 the writer asks, as the 1611 King James Version puts it:

Will the unicorn be willing to serve thee, or abide by thy crib?

Canst thou bind the unicorn with his band in the furrow? or will he harrow the valleys after thee?

Wilt thou trust him, because his strength is great? or wilt thou leave thy labor to him?

Modern scholars believe the re'em was the aurochs, or wild ox, which is now extinct. The Revised Standard Version of the Bible, published in 1952, translates the passage differently to reflect this belief:

Is the wild ox willing to serve you? Will he spend the night at your crib?

Can you bind him in the furrow with ropes, or will he harrow the valleys after you?

Will you depend on him because his strength is great, and will you leave to him your labor?

Although our modern view of the creature referred to here is quite different, ancient scholars had to come up with a Greek word for it, so, drawing on garbled descriptions of the rhinoceros, they settled on the Greek word monokeros, meaning "one horn." (Monokeros had already been used by some writers for the Indian rhinoceros.) The Latin version of the Bible turned this word into unicornus, which in English became unicorn.

To sum up: vague information on two different animals, the Indian rhinoceros and the aurochs, was conflated to produce another, imaginary animal, the unicorn. Then medieval writers, who tended to see the natural world as a single, unified allegory of Christian history and doctrine, turned this biblical animal into a symbol for Christ. And thus Marco Polo's disappointment was made inevitable.

You, we should mention, are not required to join Mr. Polo in that disappointment. There's no reason why you can't enjoy the same old unicorn t-shirts and unicorn stickers and unicorn makeup and unicorn card games and unicorn noodles you always have. And certainly the business world need not stop its metaphorical unicorning at the one we've already written about—by all means bring on the the "unicorn dinosaur" too. We'll deal with it if we have to. Words are not ruined by their histories.

One last question we'll address here: why is it unicorn and not unihorn? Besides the fact that it traces back to the Greek monokeros, the h at the beginning of the Old English word horn didn't sound like our h. It was a scraping of the tongue in the back of the mouth kind of sound (technically a voiceless velar fricative), like the Scottish ch at the end of loch. It sounded a lot more like corn than is apparent to a modern speaker, which we hope will be of some comfort to our readers.

And there you have it: the original unicorn was a rhinoceros; our ancestors pronounced horn a lot like corn; and the business world is trying to make unicorn dinosaur happen. Don't let any of it prevent you from squeeing over the next unicorn you see.