Why Do We Say 'Unequal' but 'Inequality?'

Looking closely at the negatives

Unequal was formed by adding the Old English un- to the common word equal. Inequality was borrowed as a whole word from a Latin-based French word and retained its spelling in English. Though they have related meanings, these words took different paths into the language.

The word inequality was heard frequently during and after the 2016 presidential election:

For the last 40 years, the middle class in this country has been disappearing. We have massive levels of income inequality, here in Kenosha, in Wisconsin, in Vermont.
—Bernie Sanders, in The Milwaukee Journal Sentinel, 12 Dec. 2016

Some of the world's top researchers on income inequality — who presented a new paper on the topic Tuesday — say American economic anxiety and the growing gap between the rich and poor helped put President-elect Donald Trump on a path to the White House.
—James Dennin, Mic.com, 7 December 2016 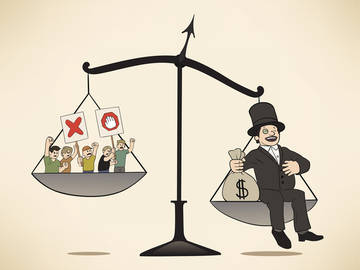 'Unequal' was formed by combining the prefix un- (a holdover from Old English) with the word 'equal'. 'Inequality', on the other hand, was borrowed from the Middle French 'inequalité'.

Inequality is defined as "the quality of being unequal or uneven." That very definition brings to light an interesting pattern in regard to negative prefixes. In- and un- are two of the more common negative prefixes. Why does the noun use one and the adjective the other?

The reason has to do with how the two words came about in English. Unequal was formed simply by combining the prefix un- with the adjective equal. It was first used in English in the 16th century. Un- is a holdover from Old English.

Inequality was first used in English in the 15th century and derived in its whole form from Latin via Middle French inequalité. The Latin root is inaequalis. In- is the negative Latin prefix that corresponds to English's un-.

Both forms are so firmly established that they are often seen juxtaposed:

Stephen added to his other thoughts the stern reflection, that of all the casualties of this existence upon earth, not one was dealt out with so unequal a hand as Death. The inequality of Birth was nothing to it.
—Charles Dickens, Hard Times, 1854

These results, of course, reflect an underlying societal pattern of unequal opportunity. Arguably, the amelioration of this inequality should also be focused on the society.
—Andrew Zimbalist, Unpaid Professionals, 1999

In fact, it's usually not until the forms appear in close proximity, as in the examples above, that one even notices that we use different negative prefixes for a related noun and adjective. It's more common than you might think: Unable pairs with inability, as does unjust with injustice and uncivil with incivility.

Not all adjectives beginning with the negative in- were derived the same way. Inedible, for example, was formed in English by attaching the prefix in- to the preexisting word edible. But incredible was derived entirely via Middle English from Latin incredibilis.

Is there any easy way to know whether a word should be prefixed with un- or in- to express the negative? Even if you're able to identify Latin roots by sight, not necessarily. H. W. Fowler, in his Modern English Usage, writes that "the general principle that un- is English and belongs to English words, and in- is Latin and belongs to Latin words, does not take us far," which is particularly true since some words, such as certain, have histories that thread through both languages. In addition, there are some words, such as unsanitary to insanitary, that have developed usefully distinguishable shades of meaning.

And so we see occasional forms that use what would seem to be a disagreeable prefix based on the root of the base word. Inequal is entered in Merriam-Webster Unabridged as an archaic synonym of unequal, as well as with a more modern sense, "uneven in quality." It was included in Noah Webster's 1828 A Dictionary of the English Language ("unequal, uneven, various"). Unequality is entered in Merriam-Webster Unabridged as well, defined as a synonym of inequality, its etymology attributed to alteration of the latter.