Where Does the Word 'Trivia' Come From?

You may be quizzed on this later

When you hear the word trivia, you might think of answering questions on pop culture and geography with your friends around a pub table, or going around a board collecting six colored wedges in a pie. This common sense of the word refers not just to knowledge, but a particular kind of knowledge: obscure facts and details that aren't applicable to one's day-to-day life. 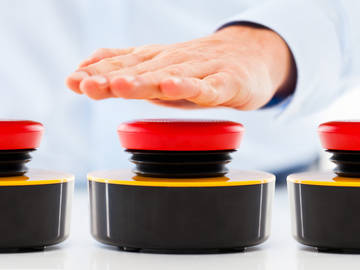 But as valuable as scholarly knowledge can be, trivia sometimes gets a bad rap. And that's probably because the related adjective trivial carries meanings that sound diminishing: "commonplace or ordinary" and "of little worth or importance." Related to this, another sense of trivia is defined as "unimportant matters."

The name of the game Trivial Pursuit plays on this sense of trivial—a trivial pursuit is something for which one takes an interest but is ultimately inconsequential.

"Oh, of course I'm not speaking of her as a party to a silly flirtation, or an object of any sort of trivial pursuit. But there are so many different ways of being taken."
— Henry James, The Sacred Fount, 1901

In Latin, the noun trivium means "crossroads"; it was formed by combining the prefix for "three," tri-, with the noun via, meaning "road" or "way." From there came the adjective trivialis, which means "found everywhere, commonplace." Trivia was derived from trivialis as a back-formation.

The "of little worth or importance" sense was well established by Shakespeare's day:

Make trivial price of serious things we have,

Not knowing them until we know their grave.

The accepted origin of the "commonplace" sense of trivial is that it arose from the notion that the crossroads, where everyone traverses, is where one encounters common things.

But there is another theory as well, one that hinges on knowledge of a different sort. In medieval times, the word Trivium referred to the threefold education curriculum encompassing Grammar, Logic, and Rhetoric—as opposed to the Quadrivium, which included Arithmetic, Music, Geometry, and Astronomy. The Trivium was regarded as a prerequisite of sorts for the Quadrivium, and as the foundation of a liberal arts education. In the word's earliest use, trivial described what belonged to the Trivium.