On September 8th, 1966, one of the most influential television shows of all time made its debut. Star Trek is still remembered for its memorable characters, imaginative storylines, and bold disregard for the proper treatment of the infinitive form of the verb “go.” 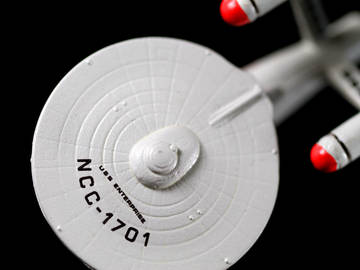 For a long time, split infinitives like "to boldly go" were considered improper—even though some usage experts questioned whether the infinitive was being split at all. There's no logical reason for the rule, and most modern usage guides say it's fine to split one in the interest of clarity.

Let's talk about Star Trek's influence on the way we treat the split infinitive. William Shatner's voiceover at the beginning of each episode stated that the mission of the starship Enterprise was “to boldly go where no man has gone before.”

A split infinitive is an English phrase in which an adverb or other word is placed between to and a verb, as in "to really start" or "to finally understand." Split infinitives don't attract the same degree of opprobrium that they used to, but they've historically been considered improper.

The problem arose when Old English became Middle English. You couldn't split an infinitive in Old English, as it was a much more inflectional language—the verb “to split,” for instance, would be written as a single word, with a specific ending designating that it was the infinitive. As our language progressed, it dropped many of its inflectional endings. We know that at least a handful of writers as far back as the 14th century had the habit of sticking words in between a to and the infinitive form of a verb, although it was not terribly common.

The rule against splitting the infinitive comes, as do many of our more irrational rules, from a desire to more rigidly adhere (or, if you prefer, "to adhere more rigidly") to the structure of Latin. As in Old English, Latin infinitives are written as single words: there are no split infinitives, because a single word is difficult to split. Some linguistic commenters have pointed out that English isn’t splitting its infinitives, since the word to is not actually a part of the infinitive, but merely an appurtenance of it.

For reasons that are not entirely clear, the split infinitive underwent a period of dormancy from the 16th through the 18th century, and essentially disappeared from use. Seeing as almost everyone left their infinitives alone, grammarians of that time did not bother to pay attention to the matter. But as the 18th century drew to a close, people began to wonder “why can’t I put adverbs wherever I feel like putting them?” and soon a veritable plague was unleashed on our language. Guardians of the language marshaled their forces and set forth to do battle on behalf of the sanctity of the infinitive form.

The earliest current record we have of someone issuing an edict about the split infinitive comes in 1803, in John Comly’s English Grammar Made Easy to the Teacher and Pupil: “An adverb should not be placed between a verb of the infinitive mood and the preposition to which governs it.” Comly, and the grammarians who followed his example in the 19th century, did not call it the split infinitive, since that particular term had not yet been invented. No one appears to have gotten around to coming up with this name until 1890, when an anonymous writer in The Scots Observer reviewed a novel in which “The split infinitive (‘to solemnly curse’) is a captain jewel in the carcanet.” However, a few years prior to this another anonymous complainer issued a jeremiad against putting adverbs and other words in unwholesome places, using language that is bombastic and poetic enough that it warrants reprinting in full.

Splitting The Infinitive
A sore evil which for many years has been hanging about our good old English tongue, has of late been showing itself in a way well fitted to alarm all those who are interested in preserving the form and spirit of the noblest of living languages. That evil is well characterized by the phrase we have placed at the head of this paragraph. It consists in what we do not hesitate to call the vile habit of interjecting qualifying words between to, the sign of the infinitive, and the principal part of the verb, as “to swiftly run,” “to attentively listen,” instead of the proper forms “to run swiftly,” “to listen attentively,” or “swiftly to run,” “attentively to listen.”
—Clericus, The New York Evangelist, 13 Jan., 1887

Oddly enough, although “to boldly go” is almost invariably the first example that comes to mind whenever one is asked for an example of a split infinitive, it does not appear to have attracted much attention when Star Trek first aired.

The hard line formerly taken against the split infinitive has softened of late, and most modern usage guides say it's all right to split an infinitive in the interest of clarity. Since clarity is the usual reason for splitting, this advice means merely that you can split them whenever you need to.