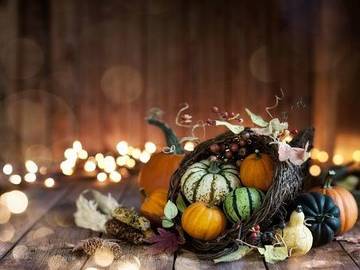 A cornucopia ... of words

As it is the day after Thanksgiving there are perhaps a few readers who have recently eaten more food than is advisable. The fact that there is a word for how such people are feeling will likely not make any of them feel better, but we’re going to tell you about it anyway. Crapulent means “suffering from excessive eating or drinking.” The word comes from the Latin crapula (“intoxication”), and has been found in dictionaries since the 17th century (Edward Phillips defined it, rather poetically, as “glutted with meat, having taken a surfet” in 1658).

Yesterday, it happened again, when Trump signed the Women’s Suffrage Centennial Commemorative Coin Act, which directs the Treasury to issue a commemorative coin to honor the 100th anniversary of American women getting the right to vote. After signing the measure – which passed both the House and Senate unanimously – the president decided to take a moment to reflect on what he considered important: his own awesomeness. “I am curious why wasn’t it done a long time ago and also, well, I guess the answer to that is because now I am president and we get things done.We get a lot of things done that nobody else got done.”
— Steve Benen, MSNBC (msnbc,com), 26 Nov. 2019

We define centennial as “a 100th anniversary or its celebration,” an unsurprising meaning, as the word comes from the Latin centum (“hundred”). There are a number of English words from Latin that have strayed from the meaning of their roots; a dean need not now oversee ten students, even though the word can be traced to the Latin decanus, which means “chief of ten.” It should also be noted that centennial has other meanings in addition to “a 100th anniversary”; all of these meanings, however, are concerned with periods of 100 years (“of or relating to a period of 100 years” and “lasting or aged 100 years”). For those who would like to celebrate something before a hundred years have passed, we have the jubilee (50 years), quinquennial (5 years), and the quadrennial (4 years).

Undercut spiked in lookups last week following reports that a forthcoming review would say that the F.B.I. had not tried to place informants in the Trump campaign in the last presidential election.

We offer a number of definitions for undercut, the most relevant of which is “to undermine or destroy the force, value, or effectiveness of.” Additional meanings of this word include “to offer to sell at lower prices than or to work for lower wages than (a competitor),” “to cut away the underpart of,” and “to cut obliquely into (a tree) below the main cut and on the side toward which the tree will fall.”

One of the meanings of secretary came to light this past week when the Secretary of the Navy, Richard Spencer, left that position.

The earliest meaning of secretary is a somewhat literal one: “one entrusted with the secrets or confidences of a superior.” This sense, now obsolete, dates from the 14th century. The meaning which until recently applied to Richard Spencer is “an officer of state who superintends a government administrative department and is usually a member of the chief executive's cabinet or advisory council.”

A back and forth between The Washington Post and the Twitter account for President Trump’s reelection campaign raised significant questions about words such as doctor, photo, and who among us can really say what a word means, anyway?

If we are to be entirely honest, there are some aspects of this conversation which leave us at a loss, and uncertain as to the best way to respond. However, we are fairly sure that there is, on at least the part of one party, a question about the precise meaning of the word doctored, and so we shall focus on that.

Although doctor has been in use since the 14th century as a noun, it did not see use as a verb until the beginning of the 17th. The earliest sense of use as a verb we are aware is a transitive one: “to give medical treatment to.” By the end of the following century doctor had taken on the meaning of “to alter deceptively.” Doctor may also mean “to adapt or modify for a desired end by alteration or special treatment” and “to restore to good condition”; without wading into political waters we are reasonably certain that at least one of the above senses may be used to describe the montage of Donald Trump and Sylvester Stallone.

Our Antedating of the Week: 'overindulge'

For our antedating of the week we are looking at overindulge, because … well, just because. The earliest record of use we had previously been aware of came in 1851; recent findings show that the word was in use some two centuries earlier.

In the Interim, we cannot  over-indulge the care of our Country, whilest no other Law is left, but blotted and corrupt Commons, made forth by men of private spirits, who eye our best actions by misrepresenting prospectives.
— The declaration of the officers of the garrison of Hull, 1649