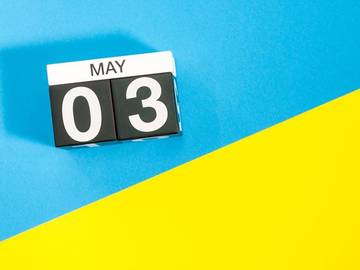 Here we go round the maypole high!

Hirsute (“hairy”) had a moment in the sun last week, after the word appeared in numerous obituaries for Peter Mayhew, the actor who portrayed Chewbacca in the Star Wars films.

Mayhew, who died Tuesday at the age of 74, is best known for the role as “Chewie,” the hirsute, 200-year-old warrior who co-piloted the Millennium Falcon with Han Solo in the original feature film 1977, and donned the suit again in four more films.

The word comes from the Latin hirsutus (“rough, shaggy”), which has served as the root of a number of other, more obscure, English words relating to hair. Among the lesser-known cousins of hirsute are hirsutal (“of or relating to the hair”), hirsutism (“excessive growth of hair of normal or abnormal distribution”), and hirsutulous (“minutely or slightly hirsute”). The last time hirsute spiked in this manner was upon the passing of Burt Reynolds in September of 2018.

Abdicate was also in the news earlier this week, after the emperor of Japan announced that he was doing just this, and relinquishing his position.

The emperor of Japan, Akihito, abdicated on Tuesday, paving the way for his son Naruhito to take the throne on Wednesday.
Takeshi Hara, The New York Times, 1 May 2019

Abdicate may mean either “to relinquish (something, such as sovereign power) formally” or “to cast off; discard” (as in ‘abdicate a responsibility’). The word comes from the Latin abdicāre (“to resign, renounce, withdraw”), and has been in use since the middle of the 16th century.

Dictionary Lookups from the Barr Hearings

The event that drove the most interest in words was the testimony of Attorney General William Barr before the Senate Judiciary Committee on May 1st.

Mr. Wittes added that he did not believe that Mr. Barr had lied or committed perjury — but that it “is possible to mislead without lying.”
—Karen Zraick, The New York Times, 2 May 2019

We have a list of words for ‘misleading without lying’ here, if you need such a way to describe massaging the truth.

“I’m not going to abjure the use of the word spying.… My first job was in the CIA, and I don’t think the word spying has any pejorative connotation at all,” Barr responded. “I think spying is a good English word that in fact doesn’t have synonyms because it is the broadest word incorporating all forms of covert intelligence collections.”
—Jenni Fink, Newsweek, 1 May 2019

"I don't know why you're caviling," Whitehouse says to Barr, sending half of Twitter to the @MerriamWebster feed

Pejorative, when used as an adjective above, has the meaning “having negative connotations; tending to disparage or belittle.” It comes from the Latin pejorare (“to become or make worse”). Pejorative may also function as a noun (“a word or phrase that has negative connotations”), as does pejoration (“a change for the worse”); thew verb most closely related to these words is pejorate (“to make worse”).

Cavil, defined as “to raise trivial and frivolous objection,” comes from the Latin word cavillari (“to jest, cavil”), which is interesting, as very few people now find cavillation (“the raising of cavils”) to be funny. Someone who is prone to cavilling is a caviler (or caviller); the adjective (“given to cavilling”) is cavillous.

Our Antedating of the Week: disputatiousness

In honor of the disputatious character of the Barr hearings we are making our antedating of the week disputatiousness, which is “the state or quality of being inclined to dispute.” Recent findings have moved the earliest known use of this word from the 1680s back to the 1670s.

Gualter in his Preface to Peter Martyr's common places, says, From hence come all kinds of evils, the pest of disputatiousness, the violation of all bonds of Charity, and shaking the fundamentals of Faith, be cause we do not reverence the Ancients as much as we ought.
—Thomas Long, Mr Hale’s treatise of schism, 1678