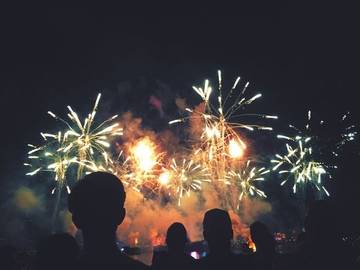 This past week saw a considerable number of lookups for patriotism, driven both by the approaching Independence Day and polling firm Gallup’s assertion that Americans are feeling less patriotic now than in recent years.

Record-low American patriotism is the latest casualty of the sharply polarized political climate in the U.S. today. For the second time in 19 years, fewer than half of U.S. adults say they are extremely proud to be Americans.
— Gallup (news.gallup.com), 2 Jul. 2019

We define the word as “love for or devotion to one's country,” and, as always, would like to stress that our definitions reflect, as much as is possible, the ways that words are used; they are not a reflection of the feelings of our lexicographers. For those who are interested in some of the differences between patriotism and nationalism, we have some information on that here.

Independence Day is a national holiday, one that we define as “a civil holiday for the celebration of the anniversary of the beginnings of national independence; specifically, July 4 observed as a legal holiday in the U.S. in commemoration of the adoption of the Declaration of Independence in 1776.” We have been using this term for the 4th of July since 1791. Today, many people celebrate it with sunburning themselves at picnics, and then watching fireworks explode. Picnic is a word that came into being slightly before our country did; the word dates to the middle of the 18th century, and initially referred to a sort of potluck meal, one not typically eaten outdoors. The modern sense (“an excursion or outing with food usually provided by members of the group and eaten in the open”) is from the early 19th century, as are the ants and sunburn.

The word firework is quite a bit older than our country, as it has been used since the early 16th century. Much as with picnic (and most of the other words in the English language) the original meaning of firework was different than the sense in which it is most often found today. In the early 1500s a firework was a military explosive; near the end of the century the word referring to non-military explosions, such as “a device for producing a striking display by the combustion of explosive or flammable compositions.”

When found in the plural form fireworks often refer to “a display of fireworks." However, we’ve been using this word in a figurative manner since the beginning of the 17th century, and it may also carry one of a number of other meanings, including “a display of temper or intense conflict,” “strong feelings of usually romantic or sexual attraction between two people,” and “a spectacular display.”

Another word much looked up this past week was squalid, following the prominent appearance of this word in the headline of a New York Times story.

We define squalid as “marked by filthiness and degradation from neglect or poverty” or “sordid.” The word comes from the Latin squalidus, meaning “rough, dirty.”

Our Antedating of the Week: 'inalienable'

In recognition of the signing of the Declaration of Independence, this week’s antedating is inalienable.

We hold these truths to be self-evident, that all men are created equal, that they are endowed by their Creator with certain unalienable Rights, that among these are Life, Liberty and the pursuit of Happiness.
— Declaration of Independence, National Archives (www.archives.gov)

Yes, we are well aware that the Declaration of Independence uses the word unalienable, but an antedating to this word could not be procured, and so we have opted to use that word’s better-known synonym. Both words may be defined as “incapable of being alienated, surrendered, or transferred,” and until recently our earliest known use of inalienable was from about 1645; recent findings show it in use from the late 16th century.

But the kings do holde it for a generall rule, that the publike demaynes are by nature holy, sacred, and inalienable.
— Anon., The contre-Guyse, 1589