One of the many difficulties inherent in creating a dictionary that accurately reflects the language of any large group of people is that these people may not all view certain words and values as equal. Nationalism and patriotism present us with an appropriately problematic pair with which to illustrate this. Are these words synonymous? Is one an insult, and the other not? Can either of them mean different things to different people? 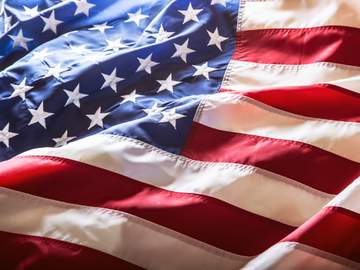 How does the speaker or writer define them?

Let’s take a few minutes to go over the respective histories of these two words to see where and when they shared meaning and in what senses they have drifted apart.

Patriotism is the older of the two words, with published written evidence dating back to the middle of the 17th century. Patriotism came from adding the suffix of -ism to the existing word patriot, which itself came into English from the French patriote, and may be traced back further to the Greek word patrios (“of one’s father”).

There is hardly any judicious man but knoweth, that it was neither learning, piety, nor  patriotism that perswaded any of that Nation to Presbytery….
—C.N., Reasons Why the Supreme Authority of the Three Nations (for the time) is not in the Parliament, 1653

There hath been in London, and repairing to it, for these many yeers together, a knot of Scotish bankers, collybists, or coinecoursers, of traffickers in Merchandise to and againe, and of men of other professions, who…hug all unto themselves; that, for no respect of vertue, honor, kinred,  patriotism, or whatever else…whereof those quomodocunquizing clusterfists and rapacious varlets have given of late such cannibal-like proofs, by their inhumanity and obdurate carriage towards some (whose shoos-strings they are not worthy to unty) that were it not that a more able pen then mine, will assuredly not faile to jerk them on all sides….
—Thomas Urquhart, Ekskybalauron, 1652

(Quick side note: the Urquhart citation above serves two purposes, being both our earliest written evidence of the word patriotism and a fine excuse for drawing the reader’s attention to the beautifully splenetic turn of phrase “quomodocunquizing clusterfists.” These two words are archaic enough to only be defined in the Oxford English Dictionary, which informs us that the former is “that makes money in any possible way,” and the latter is “a ‘close-fisted’ or grasping fellow.” Should you ever find yourself in need of an insult that is not hackneyed and stale we wholeheartedly recommend quomodocunquizing clusterfist. End of side note.)

We do not have any evidence of nationalism occurring until just before the 19th century, almost a hundred and fifty years after patriotism. And in its early use, from the end of the 18th century onward for a number of decades, nationalism appears to have been largely interchangeable with patriotism, with both words primarily being used to refer to a general love of one’s country.

Modern France, instead of diminishing, has, if possible, encreased this nationalism. Removed from his oppression and atrocities, they see nothing but the magnificence, the success and the splendor of Bonaparte, and I assure you that every poor, ignorant, stupid Creole, when he hears of an achievement of this their Demi God, evinces a lively interest, an exultation as if some choice unlooked for gift of heaven had blessed his family.
—Poulson’s American Daily Advertiser (Philadelphia, PA), 11 Oct. 1811

If there be not Conservatism, and Nationalism, and Patriotism enough in the North to rise up and overwhelm with numbers the spirit that points to the the election of anybody but Fremont (or of Fremont) as the prelude to civil war, we had better seek to save as much fratricidal blood as possible in a peaceable line of immediate separation.
—New York Daily News, 1 Jul. 1856

These two words may have shared a distinct sense in the 19th century, but they appear to have grown apart since. Or rather, it would be more accurate to say that only nationalism has grown apart, since the meaning of patriotism has remained largely unchanged. There are still obvious areas of overlap: we define patriotism as “love for or devotion to one’s country” and nationalism in part as “loyalty and devotion to a nation.” But the definition of nationalism also includes “exalting one nation above all others and placing primary emphasis on promotion of its culture and interests as opposed to those of other nations or supranational groups.” This exclusionary aspect is not shared by patriotism.

A somewhat subtler difference between the two words may be found in their modifiers and the ideas to which each is connected. When we examine large bodies of recent text we see that patriotism is more often used in a general sense, often in conjunction with such words as bravery, valor, duty, and devotion. Nationalism, however, tends to find itself modified by specific movements, most frequently of a political bent.

In one respect, the insanities of 1947 are reverberating now with growing Hindu nationalism in a professedly secular India.
–Kashmir Monitor, 14 Aug. 2017

Today, more than two decades into a democratic South Africa, Afrikaner nationalism has been severely diminished and along with it the standing of Afrikaans in the public sector.
—The New Age (Johannesburg, South Africa), 2 May 2017

Canadian Nationalism emerged 150 years ago, and has always been defended and protected not only by the spoken word but also, if required, by a dedicated military.
—Rosie Sanchez, Prairie Post East (Swift Current, Sask.), 7 Jul 2017

Over the last few years, however, a strong contender in the form of Tamil nationalism has emerged because Tamil Nadu got into river water disputes with all the neighbouring states and the neighbours did not seem to care much for Dravidian niceties although Telugus, Kannadigas and Malayalis are putatively Dravidian.
—The Times of India (New Delhi), 4 Mar. 2017

His defeat by Plaid Cymru’s Gwynfor Evans at Carmarthen in 1966 stemmed not from any upsurge in Welsh nationalism, but rather a sudden deterioration in the fortunes of Harold Wilson’s government.
—The Telegraph (London, UK), 5 Apr. 2017

So now that we’ve briefly looked over the history of patriotism and nationalism can we draw any firm conclusions about whether one or the other is pejorative? The answer is: it depends. It seems certain that, at least with nationalism, it may mean different things to different people. Of the six different kinds of X nationalism cited just above, it is likely that most people would find some politically questionable, and others not. Patriotism is rarely used in these contexts.

In U.S. usage nationalism is now perhaps most frequently associated with white nationalism, and has considerably negative connotations.

Some of us imagined that we dented the nationalism, hatred and racism that roiled the world in the first half of the 20th century.
—Jeanette Friedman-Sieradski (letter to editor), The Times-Tribune (Scranton, PA), 12 Mar. 2017

And while coded appeals to racism or nationalism aren’t new—two words: Southern strategy—overt calls to temporarily bar Muslims from entry to the United States or questioning a federal judge’s impartiality based on his Mexican heritage are new.
—Jim Rutenberg, The New York Times, 8 Aug. 2016

As a dictionary, we must weigh all matters of semantic and regional difference. Therefore we can offer no firm guidance as to whether or not nationalism qualifies as an insult across the board. We can, however, advocate for the revival of the tradition of insult with precision.