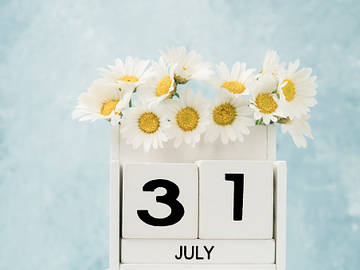 It's about to be August, somehow.

A tweet by President Trump (in which he stated “I am happy to inform all of the people living their Suburban Lifestyle Dream, that you will no longer be bothered or financially hurt by having low income housing built in your neighborhood…”) caused a number of entries in the dictionary to spike in lookups, including low-income housing and dog whistle.

Our definition for low-income housing is rather straightforward—“housing for people who have low incomes”—and the term typically is used without significant additional nuance or polysemy. In some contexts, however, it is employed in a coded fashion, with its obvious explicit meaning understood by a broad audience and a secondary meaning understood only by a particular group of people. Terms that function in this way, called “dog whistles,” are generally used as a means of conveying anti-Semitic, racist, or homophobic ideas without saying them out loud. (More common examples include urban, globalist, and lifestyle).

Well before dog whistle had a figurative political meaning it had a literal one (“a whistle to call or direct a dog; especially, one sounding at a frequency inaudible to the human ear”); this use dates from the beginning of the 19th century. There is an isolated use of dog whistle from the late 18th century, apparently as a metaphor for ‘noise or things of which people are unaware.’

Look ye, sir? as to battering pewter pots against men’s forehead, and making cravats of their kitch pokers, that’s all to me a meer dog’s whistle!
— John O’Keeffe, The irish mimic, 1795

Dog whistle has been associated, through simile, with coded speech since the 1940s; a 1947 book titled American Economic History described a speech by FDR as “designed to be like a modern dog-whistle, with a note so high that the sensitive farm ear would catch it perfectly while the unsympathetic East would hear nothing.” Dog whistle has been used as a metaphor for coded speech since the mid-1990s.

On the Democratic side of the political aisle the word of the week which many found had a coded sort of ickiness to it was ambitious, after this adjective was applied to Kamala Harris.

Ambitious has a number of meanings, including “having a desire to be successful, powerful, or famous,” and “having a desire to achieve a particular goal.” The word may be traced back to the Latin ambitio, literally, “act of soliciting for votes.” A number of people have suggested that ambitious has joined the list words which are applied in a different (and often unfavorable) sense to women (although they are not defined as gendered), as few, if any, male candidates for the Vice-Presidency appear to have been viewed as unfit by dint of their ambition.

Demon, quack, and several other words were suddenly given a good deal of attention after President Trump spoke approvingly of a doctor whose views on coronavirus treatment are viewed askance by most other doctors.

Demon, for those of you who are interested in such things for semantic (rather than seminal) reasons, may be defined in a number of ways. It can refer literally to “an evil spirit,” or somewhat figuratively to “a source or agent of evil, harm, distress, or ruin.” It may also appear in non-evil senses, such as “one that has exceptional enthusiasm, drive, or effectiveness” or “a supernatural being whose nature is intermediate between that of a god and that of a human being.” Please remember that if a demon does visit you in your sleep with salacious intent, that incubi are the ones appearing to be male, and succubi are the ones that appear to be female.

In what we can only assume is a coincidence, searches for quack have also increased over the past week. A quack is “an ignorant, misinformed, or dishonest practitioner of medicine”; the word is a shortening of the older quacksalver. Should you have need of describing the practices or pretensions of a quack, the word for that is quackery, a delightful term that has been in use since the 17th century.

But these are only smaller Angling Baits, his Draw-Net is a Printed Bill, which Catches the Gudgeons in shoals, for hatching of this, he ingages some Friend that's Book-Learn'd to correct the false English, and sprucify the sence, and interlard it with Proverbial Lattin and Cramp-words, as a Gammon of Bacon is stuft with Green Herbs and Cloaves to make it go down more savourly; then to a confiding Printer he goes, who depositing paper and pains, is refered for satisfaction to a snack in the profits of the exposed Quackery, and then out comes a Proclamation of wonders, trickt up in some strange form, with abundance of Inviting Capitals and Inticing Rubricks, the Tenour commonly to this effect.
— The Character of a quack doctor, 1676

Our Antedating of the Week: 'inaccurate'

Inaccurate (“not accurate; faulty”) is our antedating of the week, in an attempt to make our records less so. Our previous earliest known use of this word had been from 1738. Recent findings show that we were inaccurate far before this, as the word may be found in use as far back as 1665.

…so this was in Taurus, in an equal line with the Eagles-heart, not far from, or rather in a constellation called the Ship, and in the hinder Mast (Pardon the inaccurate expressions of a person that never saw the Sea) of that Ship.
— J.B., The Blazing Star, 1665