Some of the words that defined the week ending April 24, 2020 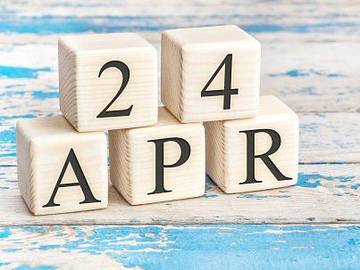 Parsimonious squeezed its way to the top of our lookups last week, after national security adviser Robert O’Brien used the word on television, speaking on the health of North Korean leader Kim Jong Un.

“We’re monitoring these reports very closely,” O’Brien told the hosts of “Fox & Friends,” adding that North Korea “is a very closed society. There’s not a free press there. They’re parsimonious with the information they provide about many things, including the health of Kim Jong Un.”
— Quint Forgey, Politico (politico.com), 21 Apr. 2020

Parsimonious may be defined as “exhibiting or marked by parsimony; especially, frugal to the point of stinginess,” (parsimony means “the quality of being careful with money or resources”). The word comes from the Latin parcere, meaning "to act sparingly, be thrifty (with), refrain from.” Parsimonious also can be used in a somewhat figurative sense, meaning “sparing, restrained.”

Recrudescence has not had a large spike in lookups over the past week, which, to be honest, is a little disappointing. Imagine if you were a word which had been used almost entirely in medical settings for the past 400 years, with a meaning of “a new outbreak after a period of abatement or inactivity,” and then when everybody and their brother starts talking about the possibility of some new outbreak during the pandemic, no one thinks to use you. We think we can all agree that recrudescence has the right to be a little upset by our collective insensitivity.

That remedie which hath bene formerly mentioned, to relieue in danger and difficultie of childbirth, and in expulsion of the dead infant, first revived her, and after restored her by the grace of God vnto her perfect health, other meanes only concurring, to remoue the recrudescence of her feaver.
— John Cotta, Cotta contra Antonium, 1623

Bailout was once again in the news of late, as various entities (states, businesses, and individuals) looked into the possibility of receiving financial assistance from the federal government, and other entities opined that they shouldn’t.

Senate Majority Leader Mitch McConnell (R-Ky.) drew flak Thursday from governors in both parties after suggesting that states hit hard by the coronavirus outbreak should be allowed to seek bankruptcy protections rather than be given a federal bailout.
— John Wagner, The Washington Post, 23 Apr. 2020

Bailout in this case functions as a noun (“a rescue from financial distress”); the verb form (“to abandon a harmful or difficult situation”) is typically written as two words. The ‘financial rescue’ sense of bailout dates to the late 1930s, and comes, rather obviously, from the word bail. There are multiple senses of bail; the one which gave rise to bailout is the “security given for the release of a prisoner on bail” sense, rather than the “a container used to remove water from a boat” (although both of these bails can be traced back to the Latin word for “porter, or carrier,” bajulus).

Presymptomatic (“relating to, being, or occurring before symptoms appear”) also attracted considerable attention last week, following reports that people who had not yet manifested symptoms of COVID-19 were able to spread the virus.

Using pairs obtained from publicly available sources within and outside mainland China, researchers estimated that 44% of the transmissions occurred during the index patient's presymptomatic stage, "in settings with substantial household clustering, active case finding and quarantine outside the home.”
— N’dea Yancey-Bragg, USA Today, 17 Apr. 2020

Earth Day was this week, falling on April 22nd. We define it as “a day in April designated for promoting concern for the environment”; it has been observed since 1970. One of the words most often found in the company of Earth Day is environmentalism. In modern use, and certainly in relation to Earth Day, environmentalism tends to have the meaning of “advocacy of the preservation, restoration, or improvement of the natural environment; the movement to control pollution,” a meaning the word has had since the 1960s. However, the earliest sense of the word, dating to the beginning of the 20th century, is “a theory that views environment rather than heredity as the important factor in the development and especially the cultural and intellectual development of an individual or group.”

Popular opinion at the present time was greatly given to a belief in environmental influences. We lived in an age, in fact, of “environmentalism.”
– The Manchester (England) Guardian, 3 Nov. 1909

Our Antedating of the Week: 'disinfectant'

Our antedating of the week is disinfectant, because it’s always good to learn something new about disinfectants. Our previous earliest known use of this word had come in 1837; recent findings show that it had already been in use for a decade at that point.

The Council of Health at Paris adopted the plan; and the Prefect of Police caused all the bodies deposited at the Morgue, to be conserved by the application of M. Labarraque’s disinfectants.
— The London Magazine, Feb. 1827

Our definition for disinfectant is “an agent that frees from infection; especially, a chemical that destroys vegetative forms of harmful microorganisms (such as bacteria and fungi) especially on inanimate objects but that may be less effective in destroying spores.” We have no lexical evidence of disinfectants being injected into lungs.