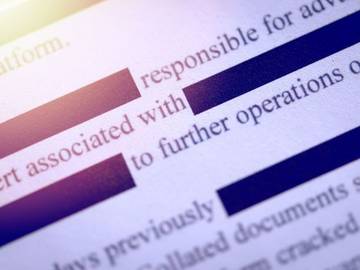 The release, and anticipation of, the report compiled by Special Counsel Robert Mueller III provoked a great deal of the interest in our top lookups this week. Chief among these was redact (“to obscure or remove (text) from a document prior to publication or release”).

While redact has been in use for a long time, the “removal of sensitive information” is fairly recent (beginning in the late 20th century). Some of the earlier uses of the word, such as “to put in writing,” while not quite antonyms, are markedly different.

Exonerate made a triumphant return to the table in the school cafeteria where all the popular words sit, as thousands of pundits and journalists (so it seemed) used the word in headlines and ledes of articles about the report.

Mueller pointedly wrote in the introduction to the section of the report dealing with obstruction that the report did not “exonerate” Trump.
— Amelia Thomson-DeVeaux, FiveThirtyEight (fivethirtyeight.com), 18 Apr. 2019

Exonerate comes from the Latin exonerare, a word meaning “to unburden.” We still have evidence of this etymology in the earliest sense of the word in English, which our evidence shows as far back as the early 16th century, with the meaning “to relieve of a responsibility, obligation, or hardship.” The sense that is relevant to the Mueller report is “to clear from accusation or blame.”

Thirdely, it may be taken and supposed that suche desire the Emperour shuld or myght thinke Him self to be exonerate and delyvered from the avauncyng of any armyes either on the parties of Guyon on this side or elliswhere, what good chaunce or fortune so ever shuld come, but onely to furnishe his parte for entertaynement of the seid Italian armye, wherof myght arise percace grete inconvenient.
— Cardinal Thomas Wolsey, personal letter, 1524

Sycophant ("a servile self-seeking flatterer") and lackey ("a servile follower") were among our more popular lookups this week, after Rep. Maxine Waters used them in conjunction, in reference to Attorney General Barr.

Lackey has not always had the negative meaning it carries today; the word came into English in the early 16th century, and initially simply meant “a liveried retainer,” “a footman.” After several decades of use the word took on the addition meaning of “someone who does menial tasks or runs errands for another. ” The “servile follower” sense of the word is relatively recent, dating from the early 20th century.

My speciall frende and auncient companion, a messanger of thyne, and a lackeye of myne, wente out togyther at Capue, the one bare my desyre and affection to the, and the other broughte a letter to me.
— Antonio de Guevara, The golden boke of Marcus Aurelius, 1537

Sycophant did not have the initial period of non-judgmental use that lackey did; while the word has had several meanings over the centuries they all been meanings that one would rather not have applied to them. At one point or another sycophant has meant “a slandering accuser,” “a base or servilely attentive flatterer and self-seeker,” and “a liar, deceiver.”

Agaynst the byting of a sycophaunt or sclaunderer there is no remedy.
— Philipp Melanchthon, The confessyon of the fayth of the Germaynes, 1536

Our Antedating of the Week: sabotage

Sabotage is our antedating of the week, because it’s a nice word with a pleasant ring to it. Previously, our earliest records of the word had been 1910 for the noun, and 1913 for the verb. Recent findings have pushed these dates back to 1900 and 1912, respectively.

Whether this pessimistic view is justified or not, the usefulness of finding new means, if possible, of strengthening the position of labor will not be contested; and many permanent or passing means of action have been suggested, and even tried, during late years: such as the general strike, the military strike, the international miners’ strike, the march of unemployed or strikers toward the capital (in America and recently in France), the Sabotage (slow and spoiled work, “go canny.” advocated in France), etc.
— Freedom (London, Eng.), Jan.-Feb. 1900

…after the millwrights had loosened the bolts and nuts of all the machinery entrusted to them, in short, after the works had direct actioned and sabotaged and paralyzed all industrial activity, after all the plutes from John D. Rockefeller down had committed suicide in despair, leaving Anarchy in undisputed control of the country, what then?
— Daily People (New York, NY), 12 May 1912