Three very different words that came from the same place

For hundreds of years amateur etymologists have looked at words that share some initial group of letters, and based on little more than similarity have decided that they must share some origin. Such hunches are, sadly, frequently not correct. But it's also the case that some related words have over the years drifted so far from each other in meaning that we no longer think of them as semantically related. Such is the case with words meaning "a student," "a young dog," and "a marionette.” 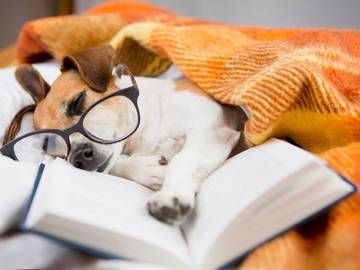 A puppy pupil, studying into the night because she's nobody's puppet

Pupil, puppy, and puppet may all be traced to the Latin word pupa ("girl"). When English first took on pupil, borrowed in the 14th century from French, the meaning of the word was used to designate an orphan, or "a boy or a girl under the age of puberty and in the care of a guardian."

Duryng these gaynes in the lowe partes, he caused the duke of Lorayn to enter into hygh Burgoyn with a great army, whiche by policie & promises brought the whole Duchie vnder obedience of the French kyng, which then claymed to haue the order and mariage of the yonge lady, as a pupille, ward and orphane, aperteyning to the croune of Fraunce, for the which title after rose no smal mischief, and troble in Flaunders, and the countreys thereaboute.
— Edward Hall, The Union of the Two Noble and Illustre Famelies of Lancastre and Yorke, 1548

And yes, the "aperture in the iris of the eye" sense of pupil is also from this same Latin source, although the English words developed independently. The use of pupil to describe a part of the eye is thought to have come from the tiny reflection of oneself seen in the eye of another.

In addition to "girl," pupa could also mean "doll" in Latin, and this sense of the word gave rise to the Middle French poupée ("doll or toy"). When Middle English took this word it changed to popi, and initially had the meaning of "a small dog used especially as a woman's pet."

Notwithstanding many make much of those pretty puppies called Spaniels gentle, yet if the question were demaunded what propertie in them they saye, which shoulde make them so acceptable and precious in their sight, I doubt their aunswere would be long a coyning.
— John Caius, Of Englishe Dogges, 1576

Within a century puppy had taken on the slightly extended meaning which it most commonly has today, "a young domestic dog; specifically, one less than a year old."

The entry into English and subsequent shift in meaning of both pupil and puppy is fairly clear; for puppet it is somewhat murkier. For while we are certain that the word comes from pupa it is not obvious which was its first English meaning. The sense of "a small-scale figure of a human or other living being" has been in use since the 1530s:

... as a puppet which springeth vp & doune & crythe pepe pepe and gothe his waye so do you make a countenaunce of greet holynes.
— Robert Barnes, A Supplicatyon, 1531

However, puppet was also being used in the 1530s in anti-Catholic writings, often in reference to the Pope, in a manner that is similar to the modern sense which we might think as figurative ("one whose acts are controlled by an outside force or influence").

Yes say the papystes, it is mete that there be one that dare boldly tell Emperours, kynges and prynces theyr faultes, as who sholde saye that no man sauynge the puppet of Rome durst purely and syncerely preche, teche, and wryte the holy worde of god, wherein as in a moost true myrrour and glasse, bothe kyngis, Emperours, & other, may beholde & se ye spottes of their soules.
— Thomas Swinnerton, A Mustre Of Scismaticyke Bysshopes, 1534

Theyr pope, their puppet, their idole, their romayn god wyll not out of their hartis.
— Richard Morrison, A Lamentation in vvhiche is Shevved what Ruyne and Destruction Cometh of Seditious Rebellyon, 1536

Both puppet and puppy have lent themselves to the creation of numerous compound nouns over the centuries. Many of these, such as puppy love ("transitory love or affection felt by a child or adolescent") and puppet government ("a government which is endowed with the outward symbols of authority but in which direction and control are exercised by another power") are still very much in common use. Others, such as the near-inexplicable puppy-water (defined by the OED as "the urine of a puppy, formerly used as a cosmetic") are quite obsolete. This concludes the portion of today's lesson on 'words which we are thankful are obsolete.'