The Surprisingly Physical History of 'Feisty'

It's traveled far from its bodily roots

What do we mean when we refer to someone as feisty? Although this word has been in use in English for a relatively short time (little over a century), it has already managed to accrue a small variety of meanings. The earliest uses of feisty include such senses as “fidgety,” “quarrelsome,” or “exuberantly frisky.” In modern parlance, the most common meaning attached to it is likely “having or showing a lively aggressiveness, spunky.”

One meaning we do not typically attach to feisty is “flatulent,” showing once again that words have a remarkable ability to leave behind their etymological roots, and move on to more respectable semantic pastures. For while feisty may now be among the adjectives of choice when describing a scrappy underdog sports team, it has distinctly earthy roots. 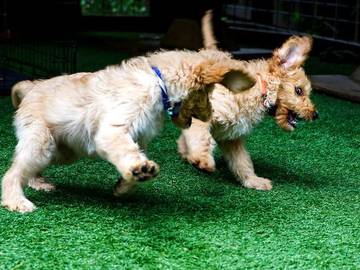 Noah Webster would not approve of such japery.

Long before feisty was a word that anyone used, English had the word fist, which meant both “a breaking of wind, a foul smell,” and “to break wind.” This word had considerable currency from the 15th century onwards, as our forebears were very much in need of words dealing with flatulence.

It is said that Harrison will appoint his “ficety” law partner, whom he elevated to Attorney General to the vacancy on the supreme bench.
— Semi-Weekly Interior Journal (Stanford, KY), 24 May 1889

The people affirm by saying “I reckon,” and deny by saying, “I don’t guess,” and retain scores of classic but obsolete Saxon terms like feisty for impertinent, gorm for muss, buss for kiss, pack for carry, soon for early, holp for helped, drug for drugged, and Saxon plurals like beastes for beasts.
— The Inter Ocean (Chicago, IL), 2 Aug. 1896

It should be stressed that there is little evidence that anyone still uses feist or feisty in the socially awkward senses given above; the former is now quite obsolete, and the latter is employed almost exclusively in the sense of “spunky.”

howled, "pin it back,"
in a voice feisty as when
you called the IV therapy
nurses vampires and
they were sure you'd
hang on for months.
— Lyn. Lifshin, In the Last Days You Said My Hair Scratched You (from Before It’s Light), 1999

I dare say Gloria Steinem likes to be described as "feisty". Okay, she is feisty, this book is feisty, if feisty is your bag you'll love this book.
— Lynn Barber, The Times (London, Eng.), 29 May 1994

We are not advocating a return to the carminative origins of feisty. After all, Noah Webster was a very serious man, not known for being overburdened with a sense of humor, and we would never sully his name with such juvenile antics. But we would like you to giggle a little each and every time you see this word used in future.