English is full of coincidences and collisions. Words of disparate origin and different phonetics can overlap in surprising ways, sometimes changing to become similar to a more familiar form, sometimes merging in ways that can be confusing. 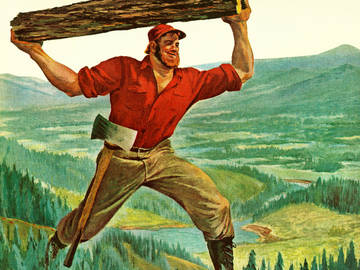 "Some people confuse 'timbre' and 'timber'," this lumberjack told our reporter. "However, the words have different origins, different meanings, different spellings, and different pronunciations."

A case in point is the pair timber and timbre. They have different origins, different meanings, different spellings, and different pronunciations—most of the time.

Let’s start with timber, which traces back to an Old English word initially meaning “house” or “building” and then came to mean “building material,” “wood,” and “trees” or “woods.” “Timbers” are large squared lengths of wood used for building a house or a boat.

As with many words for concrete objects, metaphorical senses followed after centuries of the word’s use: the material used for houses became a word meaning “material” or “stuff” in general (“it’s best-seller timber”) and referring to the qualities of character, experience, or intellect (“managerial timber”).

In British English, timber can be used as a synonym for lumber, and it also has a specific legal meaning that seems to hearken to feudal times: “trees (as oak, ash, elm over 20 years old) that are part of a freehold and may not be cut by a life tenant.”

And, of course, there’s also the interjectional use of “timber!” as a cry to warn of a falling tree; the fact that most people know this while few people have ever been able to deploy the word in such a situation is almost certainly due to cartoons.

The fact that timbre comes from French influences its pronunciation: it is often pronounced \TAM-ber\ and, with a more French-influenced second syllable, \TAM-bruh\. It’s an unusual word in that it was borrowed at three different times into English, each time with a different meaning, each time reflecting the evolution that the word had made in French.

Timbre initially meant a kind of drum, and came to French from the Greek word tymbanon, meaning “kettledrum”—the same word that gave us timpani, which came, like many musical terms, through Italian. Timbre with this meaning has dropped from use in English (it was dropped from our Unabridged Dictionary in 1961) but lives on in the word timbrel, which developed from the same root word.

In French, timbre became used for bells that were shaped like drums and usually were fixed and struck with a hammer, like the bells of a carillon. This “bell” use didn’t come into English, but it evolved in meaning from metal semi-cylindrical bell to metal helmet or crown used as the crest on a coat of arms, and this meaning passed into English in the 1400s, when coats of arms were all the rage. This use on coats of arms led the French word to its principal modern meaning, “stamp” and “postage stamp,” since official crests were impressed or stamped on documents.

Finally, timbre came back a third time in the 1800s, this time meaning “the quality of a sound made by a particular voice or musical instrument,” and is useful in being distinct from pitch, intensity, and loudness as a descriptor of sound. Now for the confusing bits: timber is listed as a variant spelling of timbre. And timbre may also be correctly pronounced just like timber as \TIM-ber\. And the spelling of timber was unsettled for many years; it was sometimes spelled tymmer, tymber, and, yes, timbre. The messy overlapping of these similar words is coincidental: the consequence of the intersection of the different cultures and languages that left their traces on English.