The Secret History of 'Bonfire'

A good fire made of bones

Bonfires are typically associated with celebrations, backyard burnings, and toasting marshmallows, and although these are all good things, the bon in bonfire isn't related to the French for "good." Instead, bonfire actually stems from the Middle English bonefire, literally referring to a fire of bones.

Is a Bonfire a Really Good Fire?

In French, bon means "good," which has led some to believe that it is the first element of the English word bonfire—after all, a bonfire is a really good fire. British lexicographer Samuel Johnson also offered up that etymology in his 1755 Dictionary of the English Language, in which he defined bonfire as "a fire made for some publick cause of triumph or exaltation," and derived the word from the French bon and the English word fire. Noah Webster believed the same. However, the etymology was corrected in the 1890 Webster's International Dictionary. 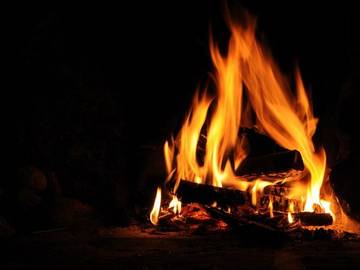 The word is actually derived from Middle English bonefire, meaning literally "a fire of bones." (Way cooler etymology, right?) The earliest appearance of the word is glossed ignis ossium—Latin for "fire of bones." And a citation from the 15th century confirms that this is not just a learned folk-etymology.

But in worshipp of seinte iohan the people woke at home & made iij maner of fyres. On was clene bones & no wode & that is callid a bone fyre. A nothir is clene wode & no bones & that is callid a wode fyre fore people to sitte & to wake there by.
—John Mirk, Liber Festivalis, 1486

There are a few key points in favor of the "bone fire" etymology. First, the creation posited by early lexicographers would be a somewhat unusual hybrid: exactly why a French word would be joined with an English one (the word fire is purely Anglo-Saxon) is hard to rationalize. Second, knowing that the word goes back to the 15th century, we might expect it to have evolved to boonfire, since boon (as in "boon companion") is the English form that developed from the French bon. Third, the spelling in the word's earliest attestation is in the form banefyre, and bane is a spelling of bone which long continued common in Scotland.

In time, bonfire was also applied to other large conflagrations, such as those for the burning of yard refuse or unwanted possessions.

Divine knowledge will make a man rejoyce, when his enemies makes a bonfire of his goods.
— Thomas Brooks, Heaven on Earth, 1654

Bonfires were also held in worship of saints, which ignited the word's general meaning of an open-air fire around which people gathered and celebrated. In modern times, this kind of bonfire is used to commemorate events, such as Guy Fawkes Day in Great Britain when bonfires are lit to celebrate the fact that King James I and the House of Lords didn't get blown up by a group of conspirators.

And of course, as Autumn rolls through, the time for bonfires and chilly picnics is upon us.

Once back on the hayride, everyone was brought down to the bonfire, where lights surrounded the picnic benches and blankets were available for use. The fire pit was positioned right in front of the Shawangunk Ridge, making it a prime location to watch the sun set.
— Shyana Fisher, The New Paltz Oracle, 3 Oct. 2019

Now go get some marshmallows. It's s'mores o'clock.