The Putrid Origin of 'Potpourri'

"Anyone care for a spot of 'putrid pot'?"

Some people delight in the scent of potpourri, and others find it to be a noisome bother. Happily, this word manages to contain elements which will make each of these groups feel that their preferences are linguistically supported. 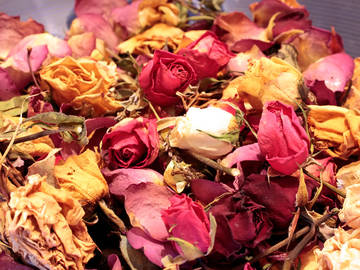 'Potpourri' was borrowed directly from the French 'pot pourri', and in that language the literal meaning of these words is “putrid pot.”

This word has two common meanings in use today, one which refers to “a mixture of flowers, herbs, and spices that is usually kept in a jar and used for scent,” and the other, somewhat more figurative, which refers to “a miscellaneous collection, or medley.” However, the earliest use of potpourri in English was to describe neither of these, but rather a kind of stew. It was borrowed directly from the French (pot pourri), and in that language the literal meaning of these words is “putrid pot.”

The earliest evidence we have of the word appearing in English comes from Randle Cotgrave’s 1611 A Dictionarie of the French and English Tongues, in which he defined it as “a Spanish dish of many severall meates boyled, or stued together.” It retained this sole meaning for the next hundred and some-odd years, before it began to see use in the middle of the 18th century to describe the aromatic blend of dried flowers. The first known use of potpourri in this sense occurs in a letter written by one Henrietta Knight (who does not appear to think very highly of the stuff).

Lords, Gentlemen, Ladies, Flirts, Scholars, Soldiers, Divines, Masters, and Misses, are all authors upon this occasion, and also the objects of each other’s satire: it makes an offensive medley, and might be called a pot-pourri; which is a potful of all kinds of flowers which are severally perfumes, and commonly when mixt and rotten, smell very ill.
—Lady Luxborough (Henrietta Knight), letter to William Shenstone, 29 Nov. 1749

Potpourri is hardly the only word in English meaning of “mixture” or “jumble” which also previously had a meaning related to some sort of food mixture. Salmagundi (“a salad plate of chopped meats, anchovies, eggs, and vegetables arranged in rows for contrast and dressed with a salad dressing”) now is often used in the sense of “a heterogeneous mixture.” A ragout may refer to a dish which is “well-seasoned meat and vegetables cooked in a thick sauce” or to a “mixture, or mélange.

Olio can be used for a kind of seasoned stew, or to “a miscellaneous mixture.” This word comes from the Spanish olla podrida, which itself is used in English both as a term for a stew or a general mix of things; the French took potpourri as a loan translation from this word in Spanish, in which language it likewise means “rotten pot.”

We are not certain why both the Spanish and the French described their stews as rotten or putrid, although it has been suggested that the Spanish method of slowly cooking this dish over a fire may have had something to do with it. If you are one of those who cannot pass by a canister of this stuff without holding it up to your nose and inhaling deeply, then you can savor the romantic sound of the word’s French origin. And if you despise the smell you can always trace the roots of the word slightly further back, and take solace in the fact that one of the French elements of potpourri, pourri, can be traced to the same Latin word that gives us putrescent (putrescere).