Hint: they carried things on their hips

There is a peculiar quotation in an issue of The New York Tribune from the end of 1920, which appears to be about the recent proliferation of hipsters:

“How can twenty-five men keep Chicago dry, when it would take that many to watch the hipsters in one hotel dining room?” This is the question heard among those who already have obtained table reservations.
—New York Tribune, 22 Dec., 1920 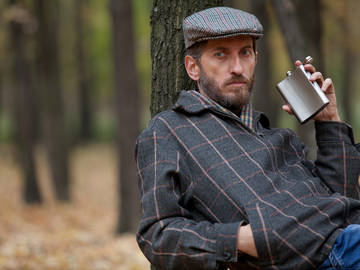 The original 'hipsters' were people who carried hip flasks during Prohibition.

Before you get too excited about the idea that the skinny-pants set have been with us for a hundred years now, confusing and irritating in equal measure with their ironic detachment and even more ironic facial hair, these are not the hipsters you are looking for. However, to those of you who feel strongly that hipsters are nothing more than rank cultural appropriators, here is even more ammunition for your arguments, since even the name hipster has been borrowed from an earlier use. Who were these 1920s hipsters that the New York Tribune is referring to? They were, quite simply, drinkers who lived up to their name, and carried hip flasks with them.

There was a good reason to carry a hip flask in 1920s New York, if you wanted to drink liquor. It was the early days of Prohibition, and the distillation and selling of alcohol was illegal; carrying a flask of your own supply was thereby somewhat more common in 1920 (the year Prohibition began) than it had been in 1919.

This use of hipster was relatively common throughout this decade, never rising to the level of Standard English perhaps, but well enough known that it was used in a variety of newspapers, without the writers who used the word feeling that they needed to explain it.

A pint of hooch isn’t much but nine months is a long time, in the opinion of old time “joy-cup hipsters,” who subscribe to the theory that a pint is only sufficient to cause a mild attack of heartburn.
-Santa Ana Daily Register (Santa Ana, CA), 7 Dec., 1927

When Prohibition was repealed, in 1933, hipster suddenly had much less currency as “a person who carries a hip-flask of liquor,” although it managed to stick around by changing its meaning (another Prohibition-era word for a law-breaking drinker, scofflaw, likewise changed its meaning after the law was repealed). The new meaning of hipster was still based on an anatomical etymology (dealing with the physical hip, rather than the sense of style hip), as the word was applied to hip-shaking dancers.

Nelson Jones is said to be the best hipster in Everett.
—The Afro-American (Baltimore, MD), 8 Jan., 1938

Hipster saw occasional use in reference to a dancer (usually, although not always, female) throughout the 1930s, but by the beginning of the next decade it started to be supplanted by the forerunner of what is currently the best-known sense of the word, “a person who follows the latest styles, fashions, etc. : a hip person.” This sense of hipster was more or less concurrent with hepster (a word that began appearing in print in 1938, with the publication of Cab Calloway’s Hepster’s Dictionary).

Both hepster and hipster came from adding an adjective to the noun combining form of -ster. These adjectives, hep and hip, are of unknown origin, and are older than one might think, each one appearing to have begun being used well over a hundred years ago (with the meaning of “knowledgeable, aware of, informed”).

And as soon as I get out I’m hep that the water’s froze. What do you think of that?
—The Washington Times (Washington, District of Columbia), 12 Feb., 1899

To define some of the circus slang the following schedule may be found useful … “Hip” means you are wise or “on.”
-The Denver Post, 28 Oct., 1902

There are at least three distinct meanings that we have seen given to hipster; of these the only one that has had use which is prolonged and widespread enough to merit a headword in our dictionary has been the sense relating to style, music, and fashion. That doesn’t mean that the word will not change again and take on a new meaning, or that one of the old meanings cannot make a comeback. If enough people all get together and agree to consistently use one of the older senses of hipster, and do this for a period of at least several years, there is a slight chance that this sense might gain enough currency to have its own definition entered. This sounds like the kind of thing that hipsters would love to do, so you never know what might happen.