The Many Plurals of 'Octopus'

Which is correct? We'll get into it.

The three main plurals for octopus come from the different ways the English language adopts plurals. Octopi is the oldest plural of octopus, coming from the belief that Latin origins should have Latin endings. Octopuses is the next plural, which gives the word an English ending to match its adoption as an English word. Lastly, octopodes stems from the belief that because octopus is originally Greek, it should have a Greek ending.

There are many ways that English manages to trip up its speakers, both native and non-native. One of the most effective of these is a method of pluralization that generally follows a set of rules, but occasionally behaves unpredictably.

Our language takes words from a wide variety of sources; generally when a noun enters into English it is pluralized as an English word, rather than in its native form. However, sometimes words will come into English and keep an ending from their original language, particularly if that original language is Latin. Thus, the plural of bacterium is bacteria, rather than bacteriums. And just to keep people on their toes, certain words of Latin extraction may be pluralized with either English or Latin endings: multiple stadium may be either stadia or stadiums. 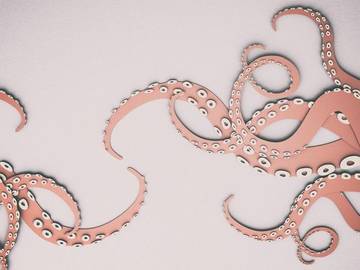 Rule of thumb: if English gets the opportunity to trip you up, it will.

The current champion in the Battle of Troublesome Pluralization is octopus, which, depending on which dictionary is consulted, may be written in three different ways: octopi, octopuses, and octopodes. Such a range of options might prompt even the most patient learner of the language to say "what the hell? C'mon, English, get your act together." This state of affairs is not so much the fault of the English language as it is of the people who speak it, who have been debating the proper way to pluralize octopus for a very long time. An article from over 140 years ago, "Octopus Philology" (titled in the clickbait of that era) offers three possibilities, admittedly sneering at two of them:

But as the Octopus grew and multiplied, it became necessary to speak of him in the plural; and here a whole host of difficulties arose. Some daring spirits with little Latin and less Greek, rushed upon octopi; as for octopuses, a man would as soon think of swallowing one of the animals thus described as pronounce such a word at a respectable tea-table. In this condition of affairs, we are glad to know that a few resolute people have begun to talk about Octopods, which is, of course, the nearest English approach to the proper plural.
— The Bradford Observer (West Yorkshire, Eng.), 7 Nov. 1873

Given that most people don't often encounter multiple specimens of this genus of cephalopod mollusks it is unlikely that you will ever find yourself in sudden need of deciding which plural form is correct. But it is always better to be prepared with your irregular faux-classical plurals—good life advice in general, really—so here is a brief explanation of your choices.

Octopi appears to be the oldest of the three main plurals, dating back to the early 19th century. The -i ending comes from the belief that words of Latin origin should have Latin ending in English (while octopus may ultimately come from Greek it had a stay in New Latin before arriving here).

BESEIGED BY DEVILFISH. How Octopi Took Possession Of Schooner. Incident of a Voyage in the Banda Sea—An Octopus Who Is Injured by a Sailor Calls Upon His Companions for Help—They Respond Promptly, and a Gang of Octopi Take Control of the Deck of the Vessel, Driving the Crew Below.
— (headline and caption) Chicago Daily Tribune, 15 Jan. 1888

It is certain that the octopi do attain to a very large size in the Indian seas; and there is nothing improbable in their taking hold of a man and drowning him.
— Penny Magazine for the Diffusion of Useful Knowledge (London, Eng.), 23 Aug. 1834

Octopuses (which may rarely also be found rendered as octopusses) dates from slightly later in the 19th century, and is based not so much on a belief as it is on the habit of giving English words English endings. While it may sound peculiar to some there is nothing incorrect about this formation. When octopus is used in a figurative sense ("something that resembles an octopus especially in having many centrally directed branches") this seems to be the preferred plural.

The Standard Oil Company, says the Louisville Courier-Journal, is one of the great octopuses of time, absorbing everything that comes within its reach, and quite killing off everything in its own line of business in the way of competition.
— Macon Telegraph (Macon, GA), 24 Jun. 1880. 2015

He meandered on for fifty minutes in a long and rambling tirade ... adorned with gloomy forebodings of a time near at hand when he, together with all the other horny-handed sons of toil (by the way his hands were very nice and white) would be enslaved, and education denied their children by those "octopuses," the "millionaires."
— The Arkansas Gazette (Little Rock, AR), 20 Oct. 1886

The rarest of the three, octopodes came into possession of its ending from the belief some people had that this is a Greek word and should have a Greek ending (and also from the belief that there is no word which cannot be improved by making it less comprehensible).

It appears that the keeper, whilst engaged in cleaning out the tank occupied by the octopodes, was suddenly seized by the leg (fortunately he had sea boots on) by the largest of the octopodes, which fastened four of his tentacles round the leg of the boot, and with the other four held firmly on to the rocks forming the back of the tank.
— The North-Eastern Gazette (Middlesbrough, Eng.), 5 Sept. 1879

There will be no huge tanks filled with mere "show" monsters—wallowing porpoises and cherub-like turtles and grim octopodes.
— The Daily Telegraph (London, Eng.) 16 Apr. 1873

All three of these have been criticized in the past, some more than others. If you're interested in choosing the word that is most likely to be considered correct and understandable by your audience you would do well to opt for either octopuses or octopi. Octopodes, it should be noted, takes a slightly different pronunciation than the other two words, placing the emphasis on the second syllable, rather than the first. It more or less rhymes, appropriately enough, with "don't say that please."