The Physical History of 'Stereotype'

From the printing house to everyone's house

Toddlers: they're almost as likely to become memes as kitties and pups, what with their saying the darnedest things, using their victuals for facial adornment, and just generally being their impulsive, demanding, reason-defying selves.

Except that whole characterization isn't fair; it's a stereotype. Which brings us to the point of this article: Why do we call it a "stereotype"? 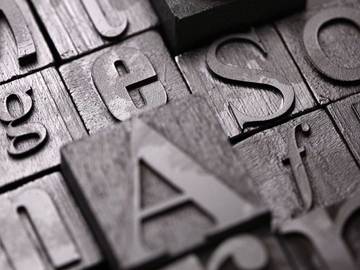 'Stereotype' has taken a path similar to that of 'cliché.'

The noun stereotype typically applies as we use it above—to refer to a commonly held mental picture that represents an oversimplified opinion, a prejudiced attitude, or an unconsidered judgment about someone or something. But before there were stereotypes about people, stereotypes were made of metal and found in printers' shops.

Traditional printing of the mechanical rather than human-with-writing-implement kind originally involved a typographer painstakingly placing each type piece—each letter, each item of punctuation, etc.—onto a plate. Ink would then be applied to the type, and paper laid over it, before an upper plate would be lowered onto it and pressed against it, thereby transferring the ink to the paper. Gutenberg's original mid-15th century wooden press could print about 250 pages per hour. If you wanted to print more than that, you'd need more presses, and each would need to be loaded individually with type pieces.

This worked, but by the time the late 18th century had rolled around, an ever-increasing demand for printed material was happily met with innovation: the stereotype was a kind of printing plate that could be one of many. The process for creating a stereotype began with the original kind of plate, which was then used as a form to create a mold (technically a matrix) made of a mat or papier-mâché. The matrix was strong enough to be used for casting multiple stereotypes from hot metal. The durable stereotypes could then be used over and over to print multiple pages.

The word is French in origin: stéréotype. Stéré- correlates to English's stere-; both mean "solid." Stereotypes were not moving (or movable) type, but solid type.

Stereotype functions as both noun and verb in English with printing applications; it's the plate cast, and it also means "to make a stereotype from." The verb also means "to repeat without variation," "to make hackneyed," and "to develop a mental stereotype about."

Neither noun nor verb took long to extend from its printing-related use to figurative use:

He has a great deal of natural poetry about him, and I think will become ere long distinguished in that line. I have at least sufficient poetical taste about me to acknowledge his superiority. Though not eccentric outwardly, the deeper traits of his character are strange, and not marked with the stereotype of common life.
— Denison Olmsted, The Life and Writings of Ebenezer Porter Mason, 1842

Go on, my dear friend, till you, and those who, like you, have been saved, so as by fire, from the dark prison-house, shall stereotype these free, illegal pulses into statutes; and New England, cutting loose from a blood-stained Union, shall glory in being the house of refuge for the oppressed,—till we no longer merely "hide the outcast," or make a merit of standing idly by while he is hunted in our midst; but, consecrating anew the soil of the Pilgrims as an asylum for the oppressed, proclaim our WELCOME to the slave so loudly, that the tones shall reach every hut in the Carolinas, and make the broken-hearted bondman leap up at the thought of old Massachusetts.
— Frederick Douglass, The Narrative of the Life of Frederick Douglass, 1845

Neither example quite matches the corresponding modern use, but the path for the modern use to develop along is clearly there.