Except, of course, that it is, as the millennia of poetry prove. And etymologically, a poet is a maker. 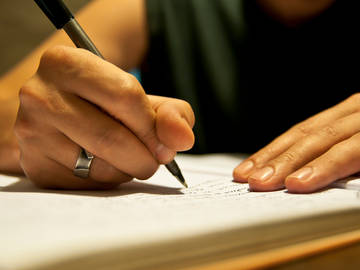 'Poet' comes from a Greek word meaning "to make."

The word poet, which has been in use in English for more than 600 years, comes from the Greek word poiētēs, itself from poiein, meaning "to make." The word also shares an ancestor with the Sanskrit word cinoti, meaning "he gathers, heaps up."

The English language has had other terms for poets over the years, among them the word maker itself, as early as the 15th century. (Chaucer wrote in The Canterbury Tales "For I woll nat feyn oon woord, as makers doon to ryme, / But counsell yewe as prudently as God woll send me grace.") English speakers esteemed poets highly then; the word maker had been used to refer to God since the century before. Shaper too has historically referred in English to both a poet and God—though the uses were separated by centuries, with the deity as the referent mostly in the 14th century and the poet as the referent mostly in the 19th. (Both uses are too obscure to be covered in this dictionary.) Suggesting more mundane attitudes about poets is the term sayer which has also over the years referred to a poet, but again not with enough frequency to warrant inclusion in most dictionaries.

But it is the word poet that has been most often tasked with referring to the person who writes poetry, who makes something that is unmistakably a thing despite that thing being what Thomas Babington Macaulay called "an illusion on the imagination." Shakespeare put the same notion to verse in A Midsummer's Night Dream:

The poet's eye, in a fine frenzy rolling,

Doth glance from heaven to earth, from earth to heaven;

And as imagination bodies forth

The forms of things unknown, the poet's pen

Turns them to shapes, and gives to airy nothing

A local habitation and a name.

Quite a maker indeed.